After spending the past 2 weeks in Birmingham, being able to slowly get some structure to my days, it's now back to the craziness and busy times of camps and travels. This week's camp is the Pure Officiating Camp in Boise, Idaho.
As part of registering for the camp, I had selected the option that I was interested in having another official be a roommate for the duration of the camp. Prior to having to confirm the booking for the hotel, I wasn't able to organise with any other officials to share a room, so I ended up going ahead and booking the room just for me. Just prior to the camp I had an official reach out to me and ask if I would be willing to share a room, as he hadn't been able to get his original plans sorted out. My room only had a sofa bed spare, and after confirming he was prepared to use that, we organised for us to share the room.
Like all of my travels, I arrived the day before the camp was due to start, albeit quite late. My roommate arrived the morning of the camp and after doing some brief introductions, we headed to the opening session. Fortunately, on our way out of the hotel we ran in to a couple of officials who were I met at the New Orleans camp, with one of them being kind enough to offer us a lift using the car that he had hired. He was kind enough to continue to help getting us to and from all of the remaining activities for the rest of the camp, which was greatly appreciated, as the sessions were held at Boise State University, approximately 10-15min from our hotel.
Just like the previous Pure Officiating camp, this camp started with a "getting to work" session, an interactive session where we reviewed plays and had various discussions around each play. Part of this interactivity involved each position (Referee, Umpire etc) indicating their thoughts for a particular play, with the answers by the campers analysed, to try and get an understanding of how people interpret each situation. It was quite interesting to see various positions have a similar thought on some plays but then have a variety of thoughts for a different play. By using those results and then discussing the play itself, we're able to work on getting more consistency within positions and then within crews.
Once this session was completed, we headed back to our hotel to get changed and ready for the scrimmages that night. While we were getting ready for the scrimmage my roommate received a call and was "hired\promoted" in to another conference. It was exciting being there when he received the call and being able to congratulate him on his promotion.

The scrimmages were being held at the Boise State University football field, which is famous for having blue turf. This was one of the advantages of attending this camp, being able to walk and officiate on such a legendary field.

The structure of the scrimmages was a rather unique setup. Each team would line up on the 25yd line (1st and 10) and try to score. Once that series was completed, either by a turnover on downs or by a score (followed by a 2-pt play), they would swap offense and defense. Each end of the field had a "game" running at the same time.
This continued in a round-robin format between all of the teams until there was eventually 2 teams left to decide the winner of the "Showdown". 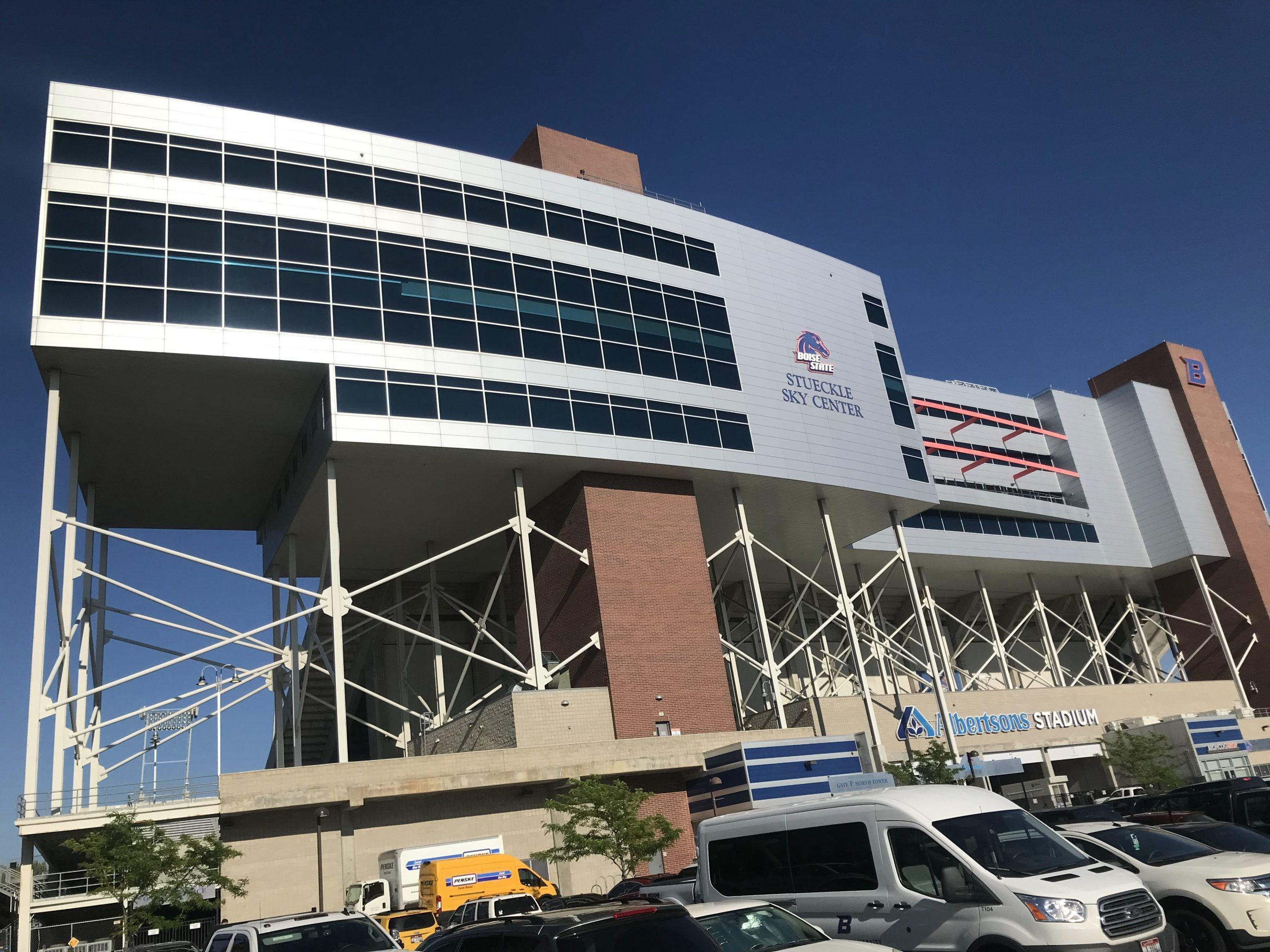 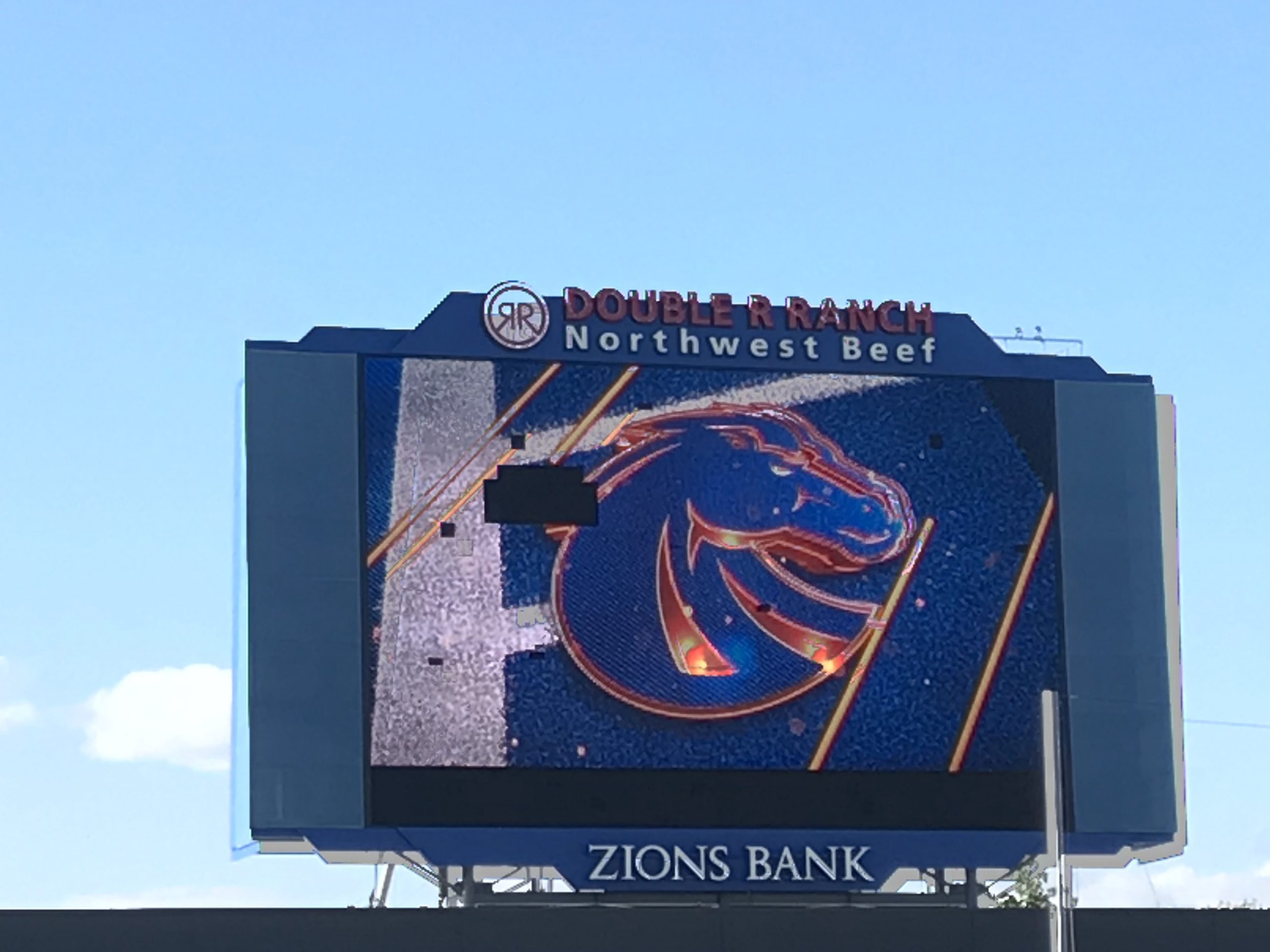 It's a very unique approach but from an officials perspective it was great, as it kept the intensity high between the teams and gave us plenty of opportunities to work on various aspects of our game.
For this camp, there was the equivalent of 4 x crews of officials, and with 2 sets of officials being on the field at the same time (opposite ends), it meant that we had some really quick rotations allowing us to get observed, provide some feedback, and then get on relatively quickly and work on making those adjustments. It was extremely fast-paced and before we knew it we had been on the field for over 3hrs. 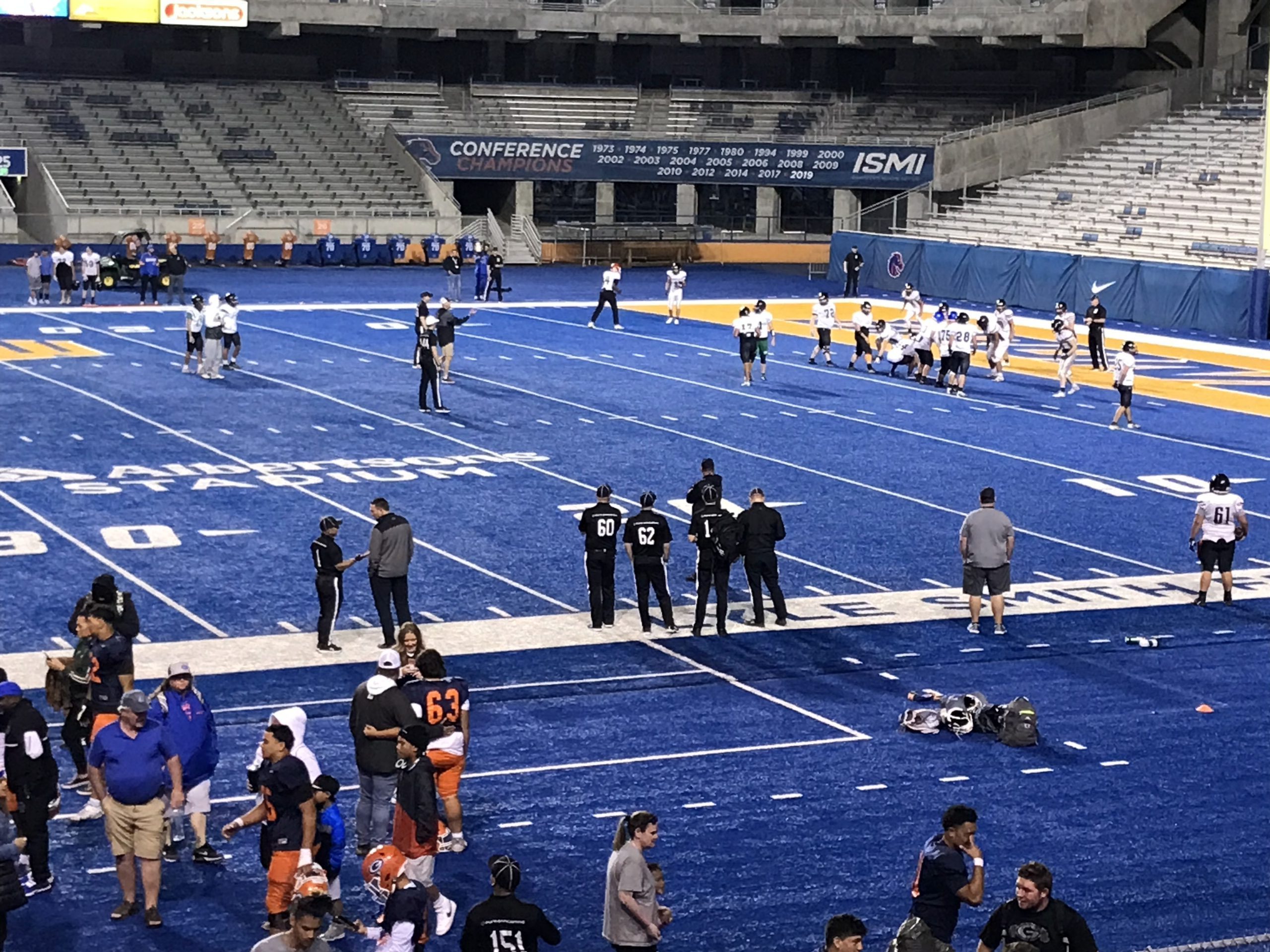 The next morning we again met at Boise State University for our sessions. These sessions were "breakout" sessions where we were assigned rooms based on the position that we officiated. We then spent most of the day reviewing plays from the night before and talking through various scenarios that we experienced and being challenged by the clinicians in regards to how we processed each play. At times it was uncomfortable being confronted in front of your peers but it was a great way of learning and improving on our skills.
We finished off the camp with a dinner where we were able to network and talk to some of the officials that we hadn't had a chance to speak before now. They were all interested to hear about my current travel plans, where I had been already but also what I still had planned for the rest of this trip. I gained some valuable insights in to their own officiating journeys and was also able to hear some of their experiences with games, players and coaches.
It was another fantastic opportunity with plenty of learning and growth opportunities. As I planned to stay in Boise for an extra day and fly out after that, I ended up spending the day with my Referee from the El Paso camp, who also happened to be here at Boise. We went in to the centre of Boise, had lunch at a really nice restaurant that was previously used as the Boise State National Bank. We then headed to the Capital building and had a look around that. 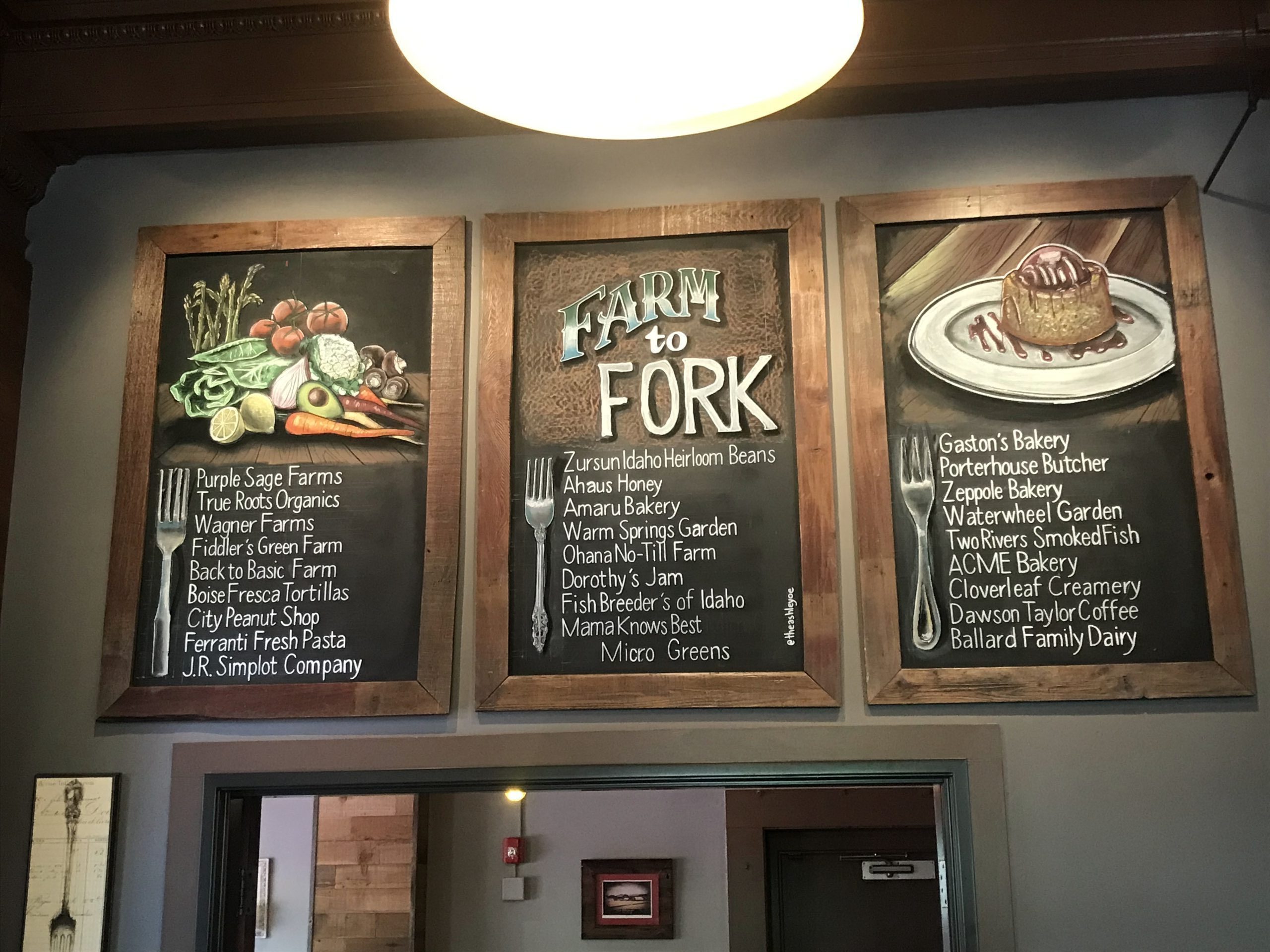 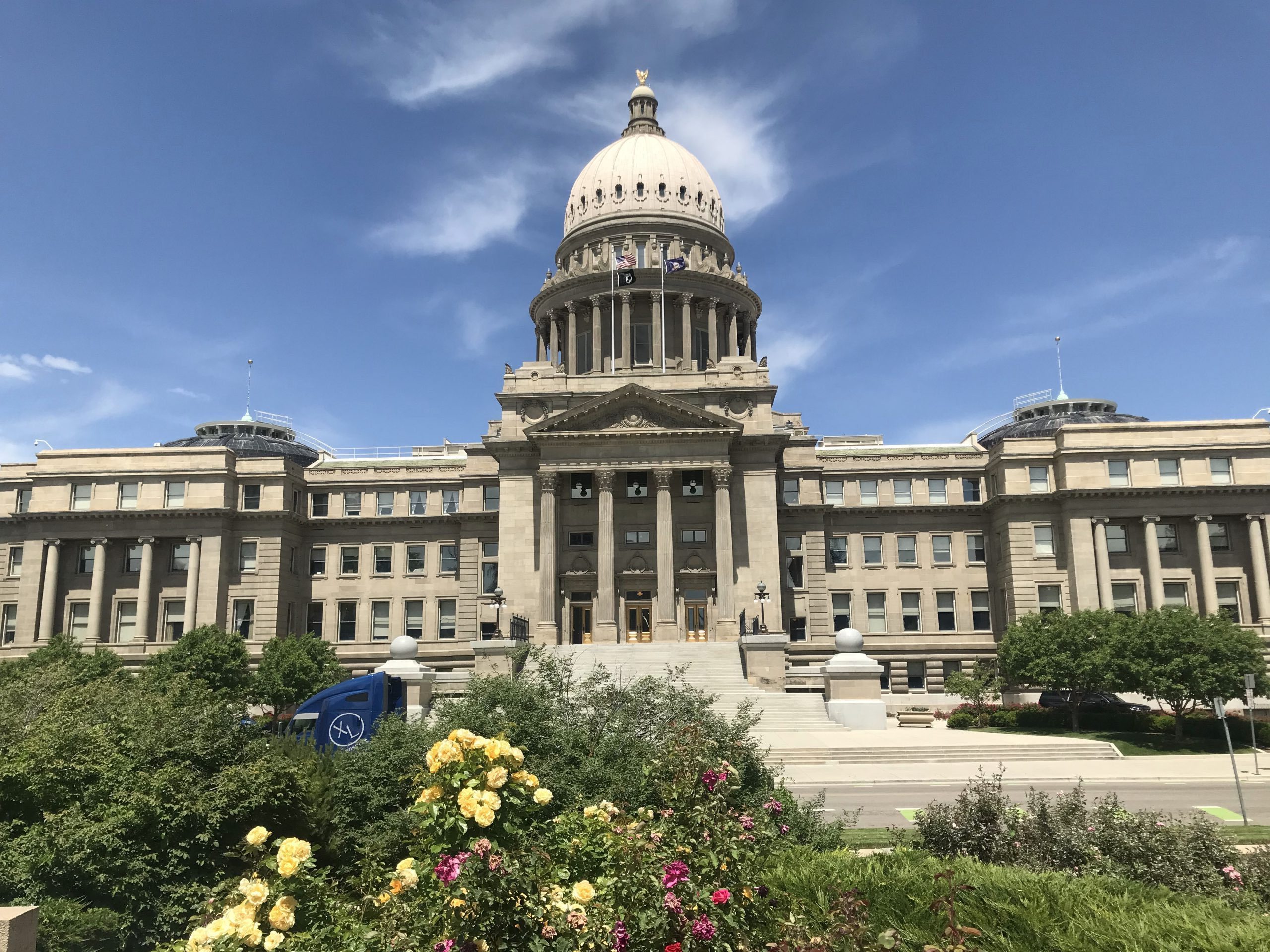 We had been informed that there was a nice hiking trail that took you to the top of a mountain that had a really great view of Boise, so we finished off the day with a hike up that trail. The view from up here was spectacular and was a great way to finish up our time here in Boise. 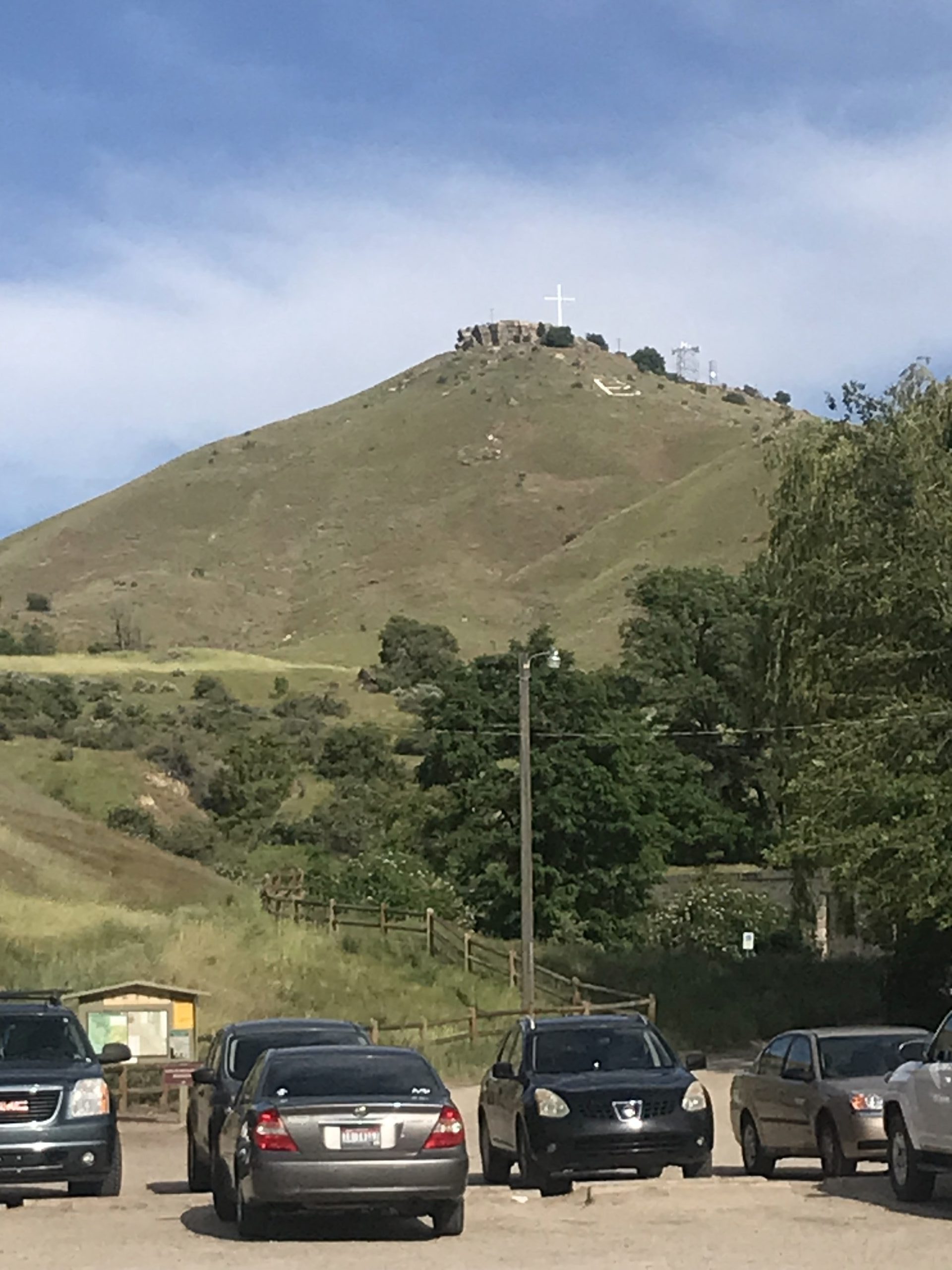 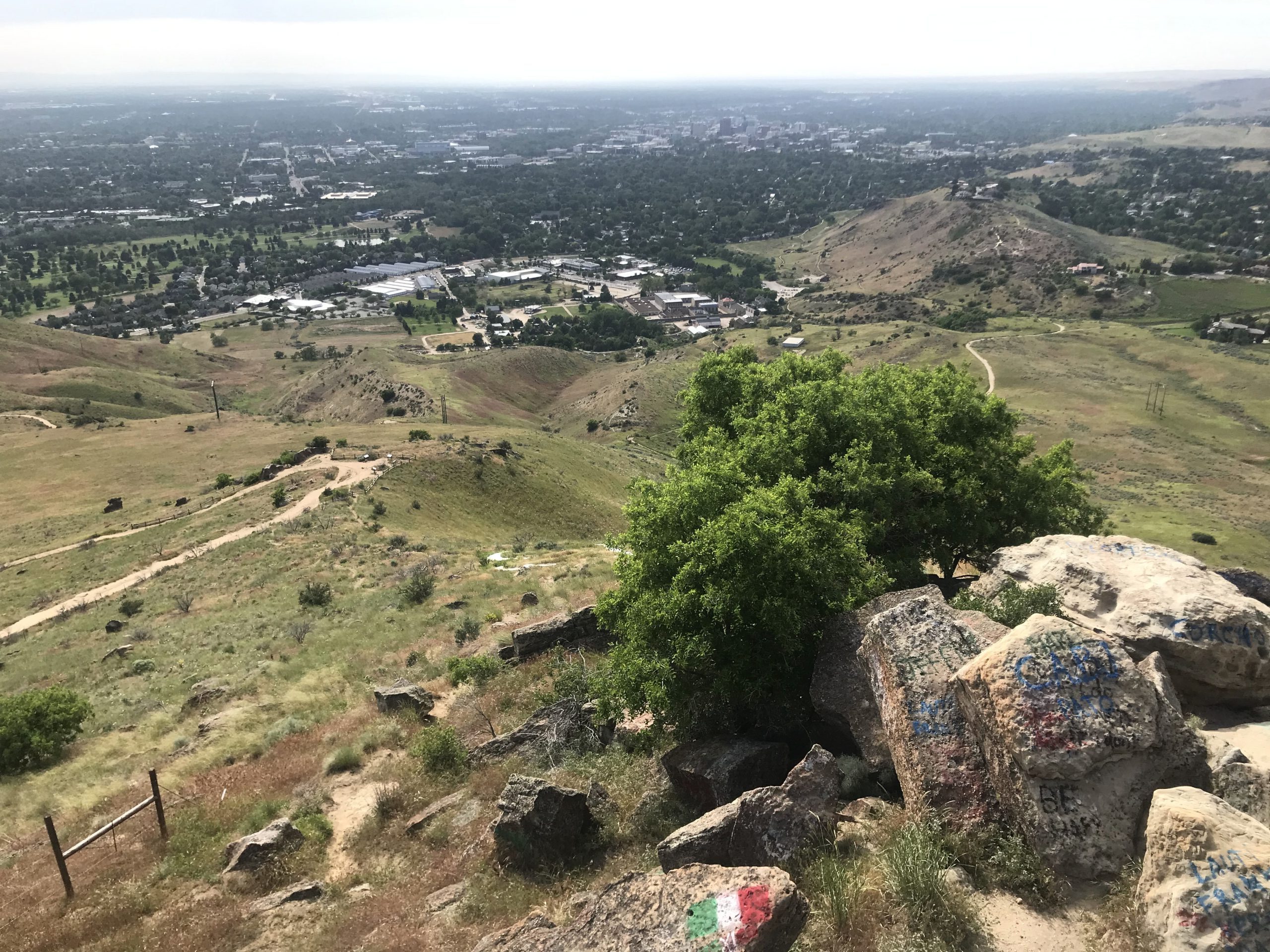 Initially, I was going to find an adventure park and look at undertaking some of the activities there but as I was driving towards it, I noticed sign-posts for the Crazy Horse Memorial, so I decided to go and see that instead. At the Crazy Horse Memorial, the main information center is located quite a distance from the actual memorial, but there is a bus that you can take to get a closer look. I was able to jump on that and go for a closer look. You're still a fair way away from it but are able to gain an understanding of how much work is involved to make it look like the designed finished memorial. 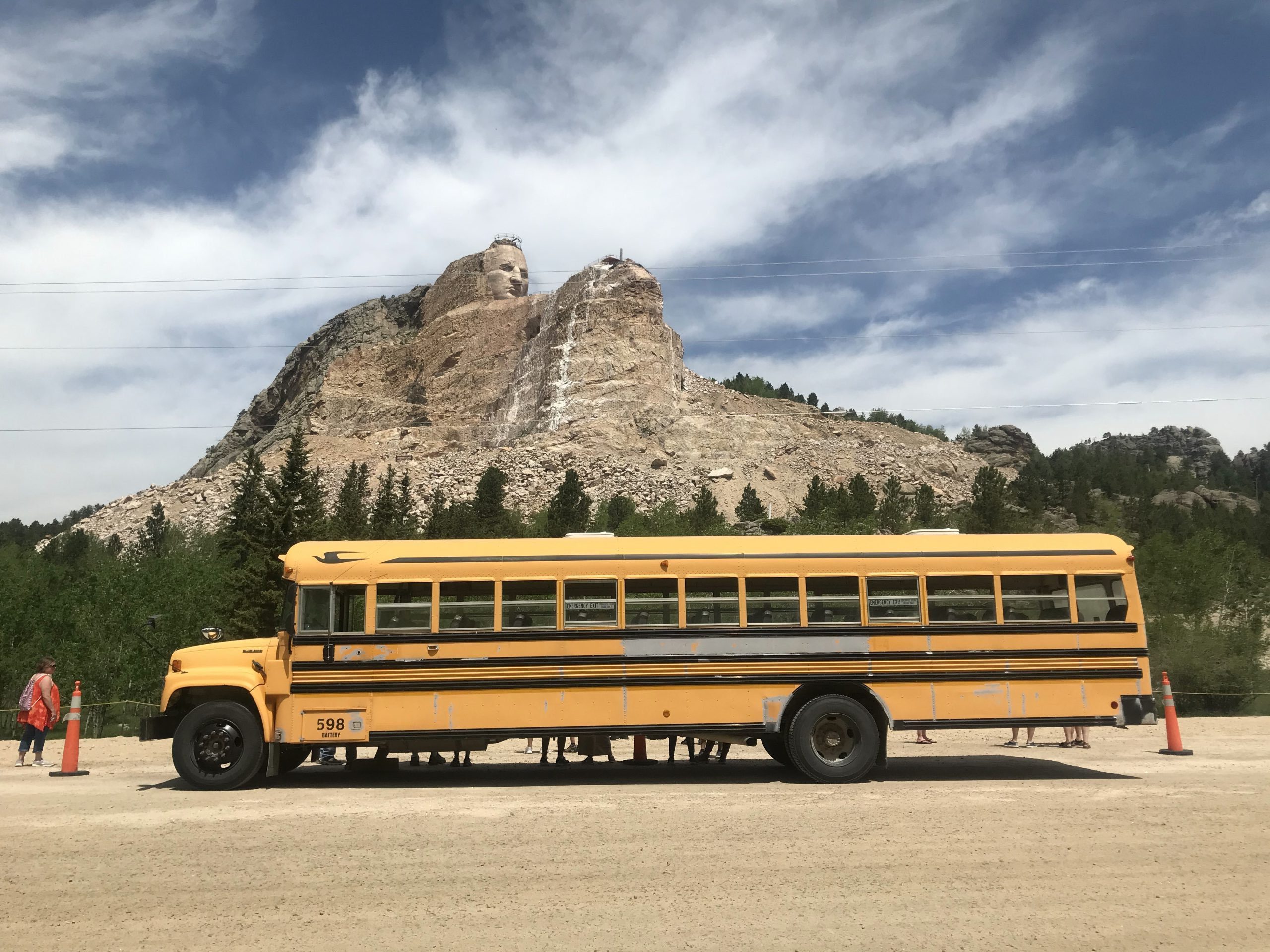 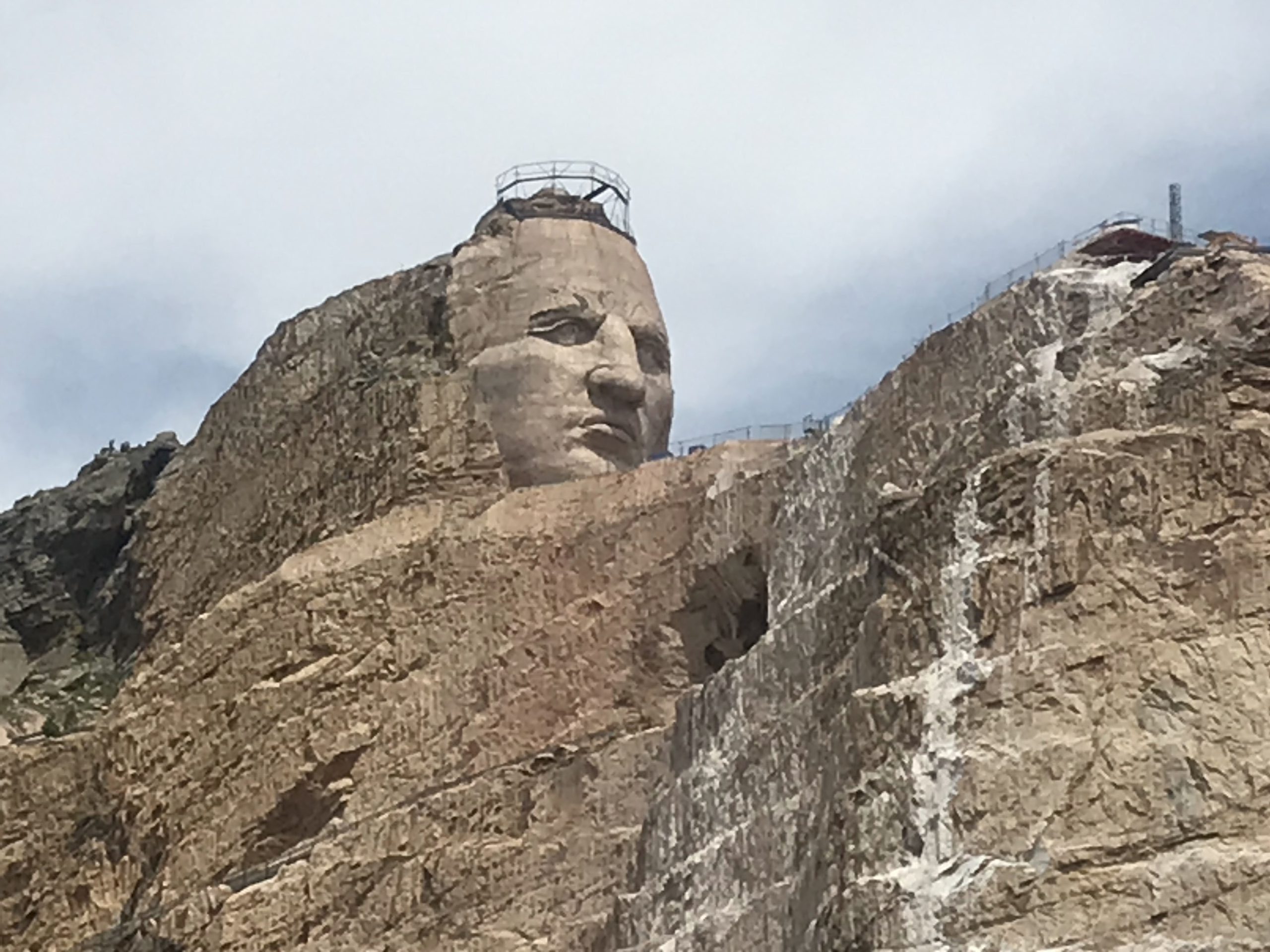 After having some lunch at Crazy Horse, I drove back to Mount Rushmore (it was about 30min away from Crazy Horse). It was pretty incredible to walk around and see all of the information about how it was initially designed, and then built. We tend to think that painting portraits, or even some carvings, can be pretty spectacular but when you're carving a memorial in to a mountain, it's really incredible what they were able to achieve. 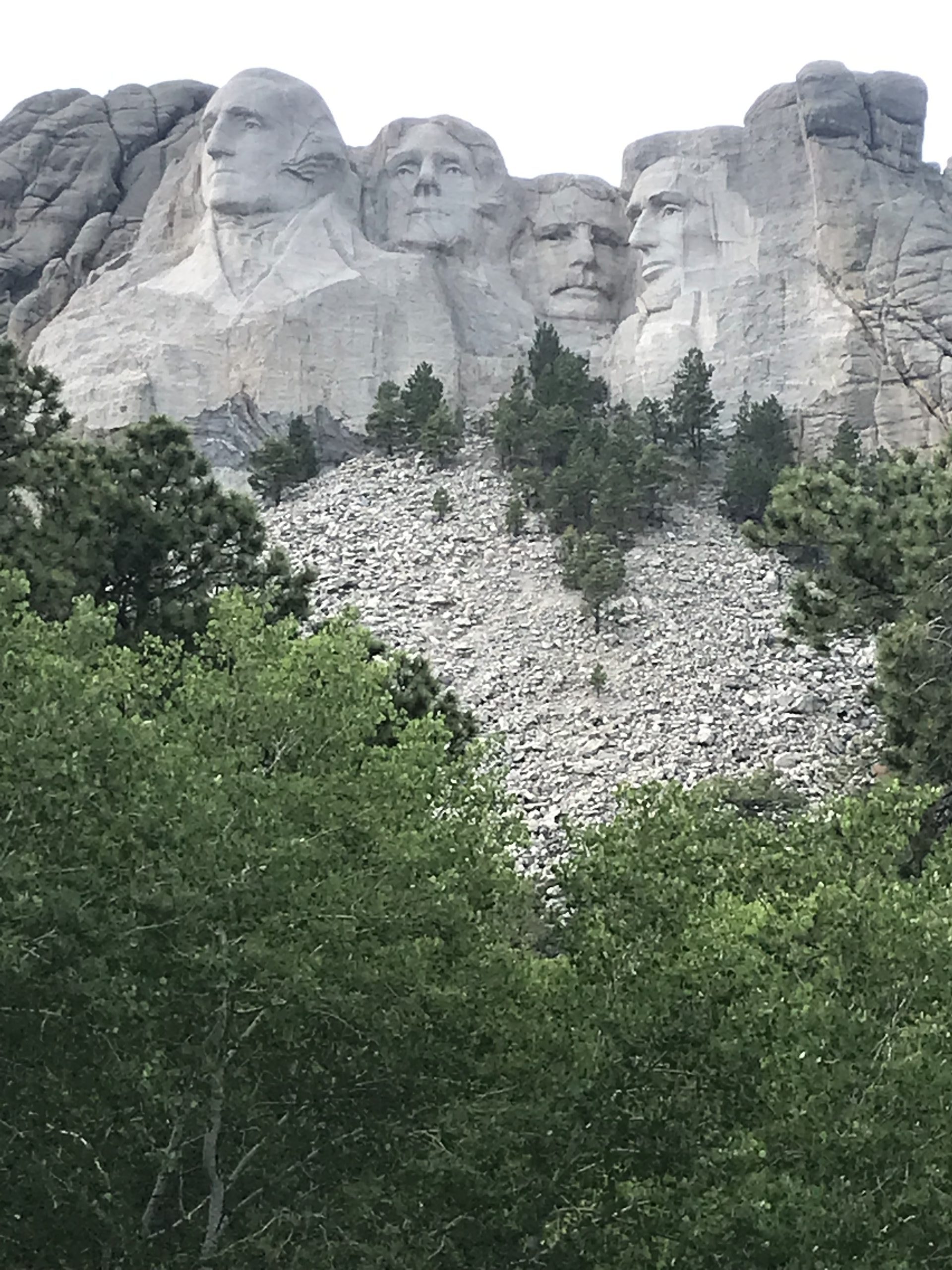 I had planned to stay overnight in a canvas glamping location that wasn't far from Mount Rushmore, so that I could cut down on the amount of driving that I was doing in one day. I went and checked in my accomodation and as I had some spare time before heading back to Mount Rushmore for their nightly lighting of the memorial ceremony, I went for a hike around the accomodation area which ended up coming to a pretty spectacular lookout where you had views all the way back to Mount Rushmore. 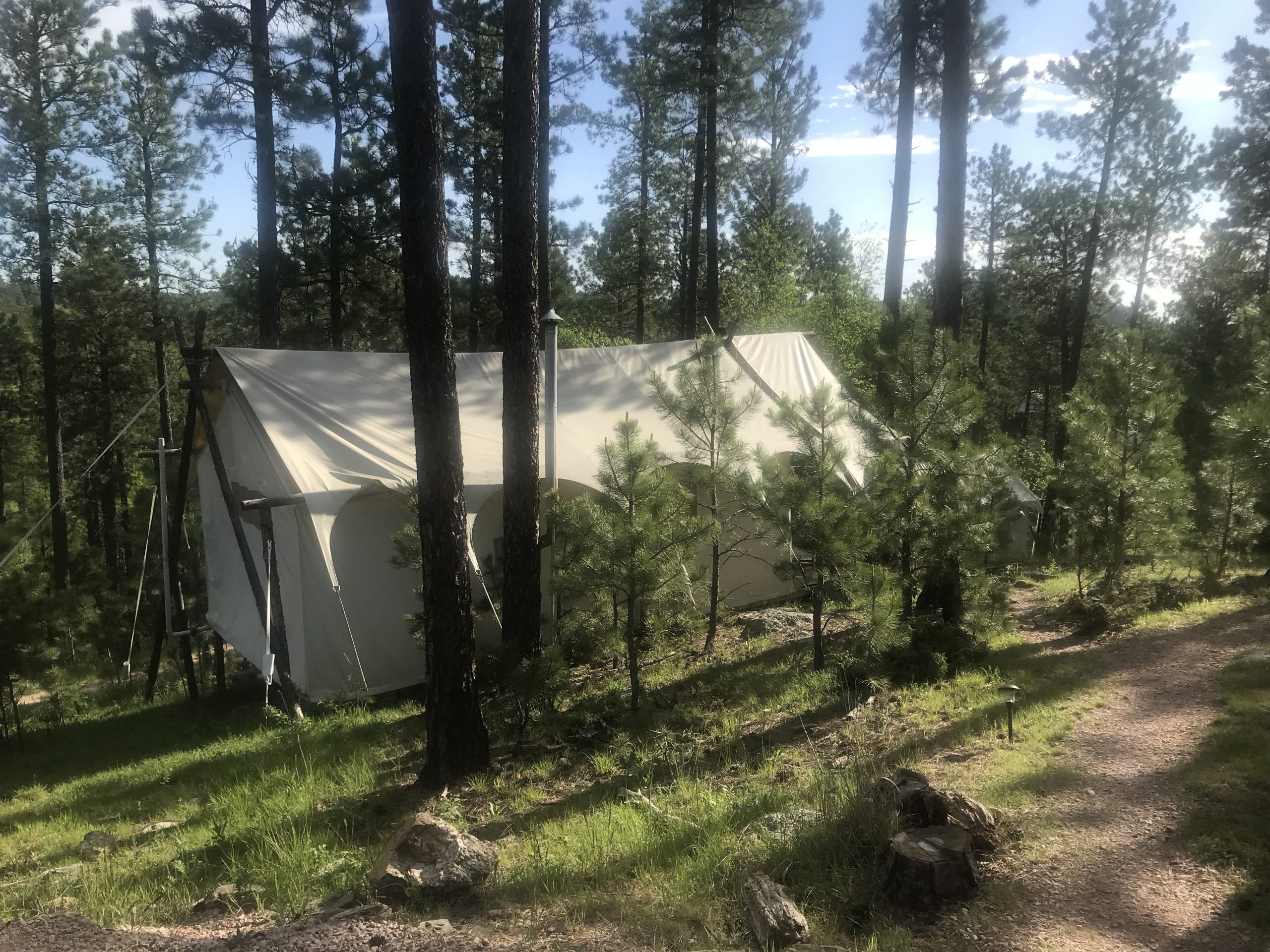 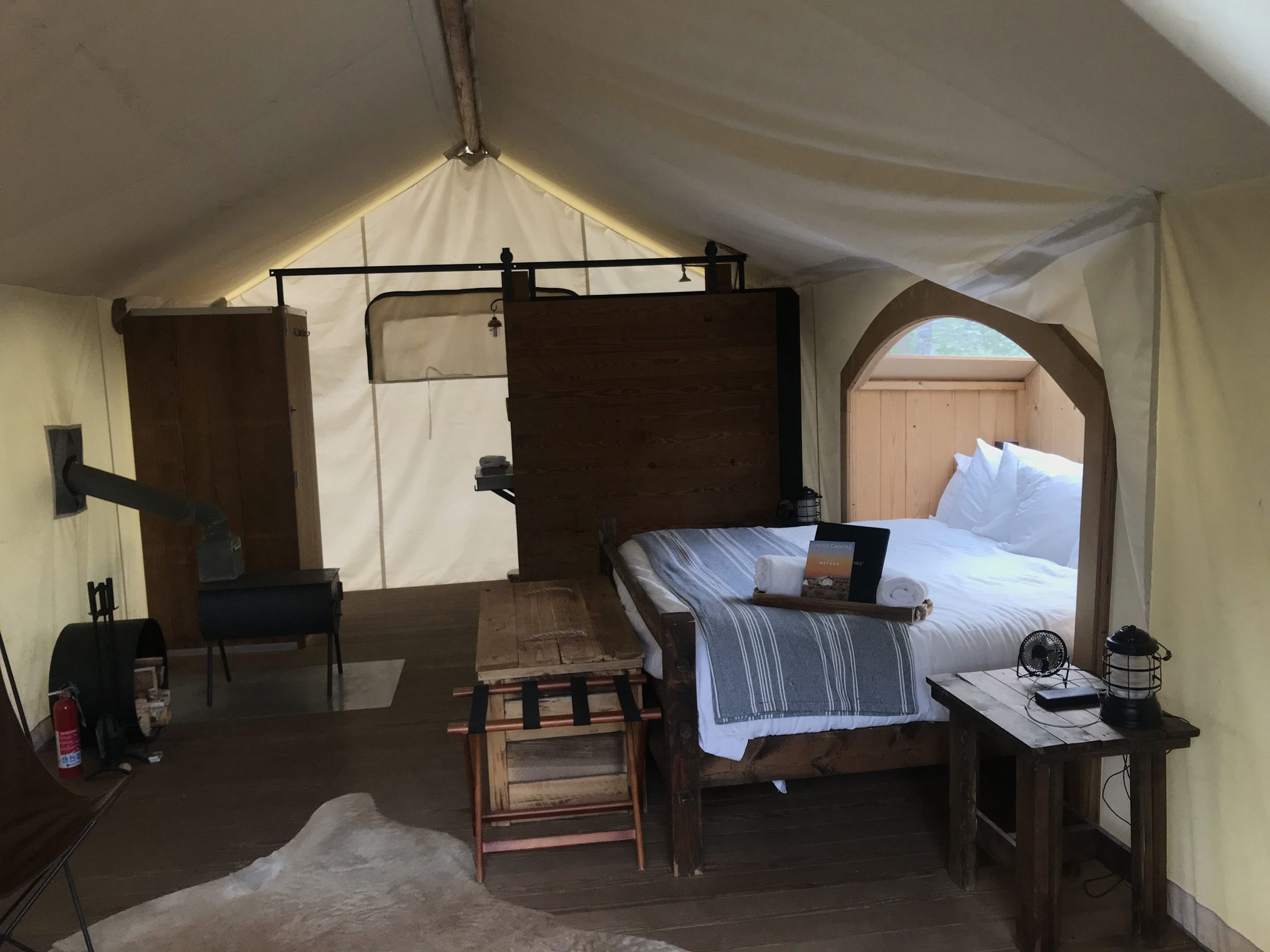 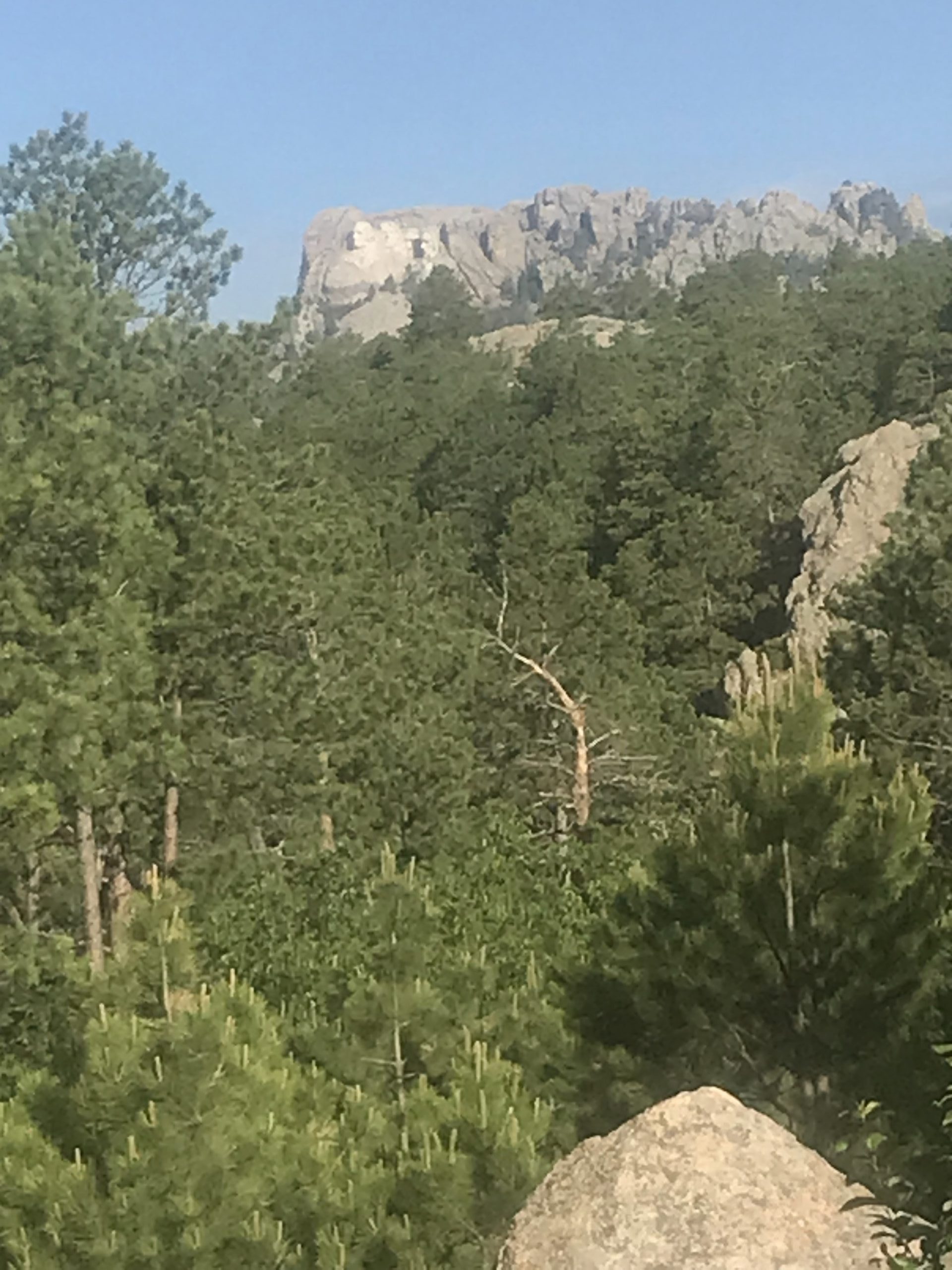 The added benefit of staying where I was, they are setup in such a way that when eating breakfast you have a clear view of Mount Rushmore, so it was nice to be able to sit and eat breakfast with some pretty spectacular views. Following breakfast, it was a drive back to Rapid City to catch a flight to my next destination\camp.