The nonstop travel continued, this time after leaving Rapid City, it was a couple of flights to Las Vegas. Originally I had planned to attend an officiating clinic in Sioux Falls, South Dakota, and then travel to Cedar City, Utah (via Las Vegas) for the Tait Consul clinic straight afterwards. Unfortunately, the date for the Tait Consul camp was brought forward a day, which meant there was too much of an overlap with the clinic in Sioux Falls so I had to pull out of that one.
It was disappointing to miss Sioux Falls as that clinic was the first camp recommended to me, and there were a couple of clinicians at the camp who I already knew and was hoping to catch up with. Oh, well, maybe next year I'll be able to get to that one.
As part of the preparation for the Tait Consul clinic, we were assigned to crews that we would work with throughout the duration of the camp. Our Referee subsequently organised a couple of pre-camp conference calls where we were able to introduce ourselves and work on some mechanics so that we were all on the same page when we got on the field. This was a great way of meeting our crew members and getting to know each other before we got to camp.
Through our introductions and other conversations, one of our crew members mentioned that he lived in Las Vegas and was planning on driving to the camp. He was kind enough to agree to pick me up and drop me back to Las Vegas, which made the travelling for me a lot easier. My flights from Rapid City ended up getting in to Las Vegas quite late, which meant that I wasn't really able to do much in Las Vegas prior to the camp, as we were going to leave around mid-morning the following morning. As I was going to stay at the same hotel for one night, after the clinic, I was able to leave the large suitcase that I've been travelling with, with their baggage storage, reducing the amount of baggage that I took to the clinic.
After waking up, it was a case of re-organising my luggage so that I had enough clothes to cover for the duration of the camp, as well as all of my officiating gear, and leave my suitcase with the baggage storage at the hotel. Due to the accomodation that we were staying in for the clinic, we were required to bring our own bed linen. This meant that in the morning I had to go and do some shopping and buy some bed linen for the camp, as I didn't want to travel around my entire trip with bed linen taking up space in my suitcase. I was able to source some relatively cheap bed linen and then organised to meet up with my crew mate so that he could pick me up and we could make our way to Cedar City.
The drive to Cedar City was pretty spectacular, particularly when driving through the mountains in the northwest section of Arizona. 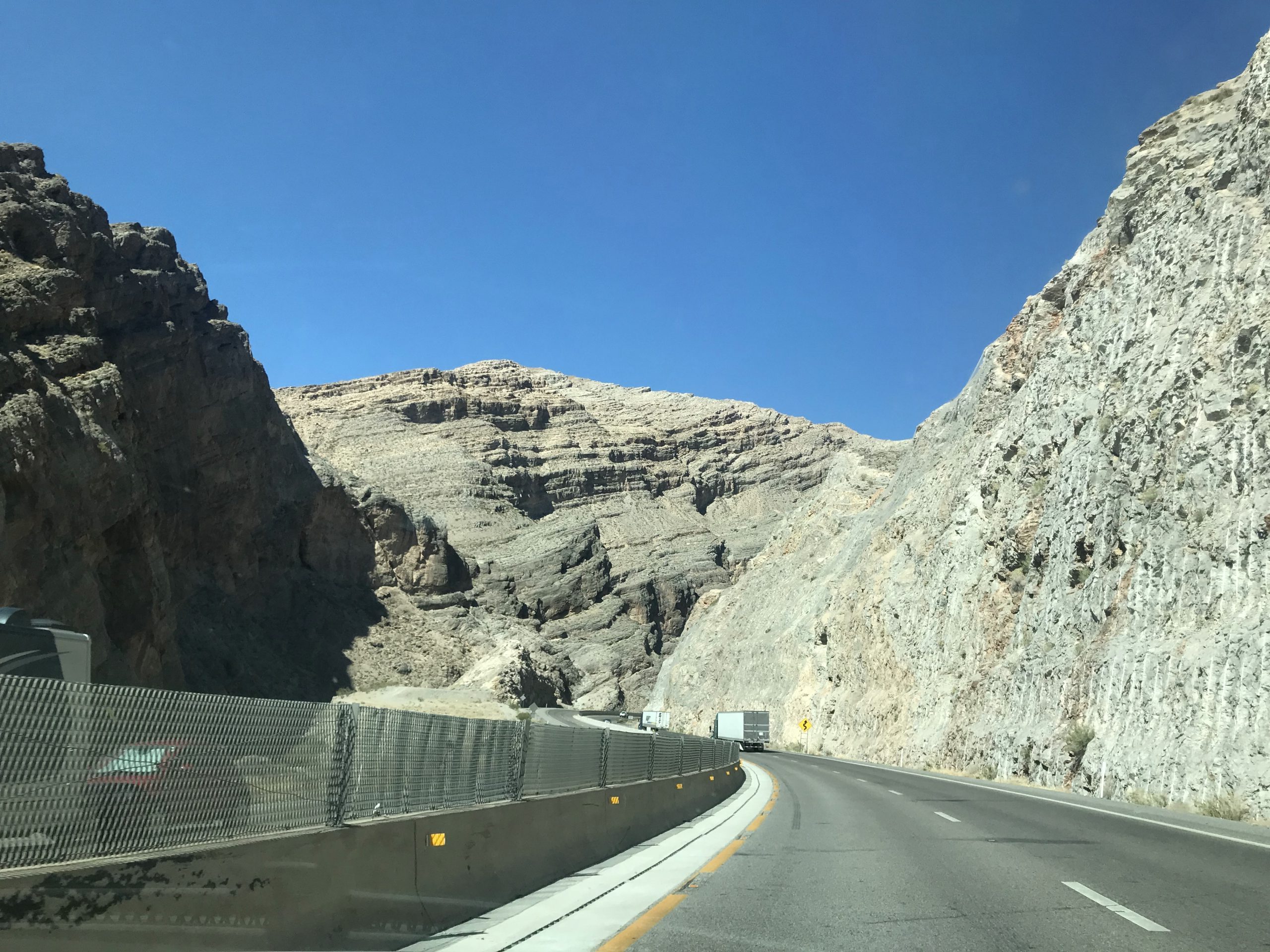 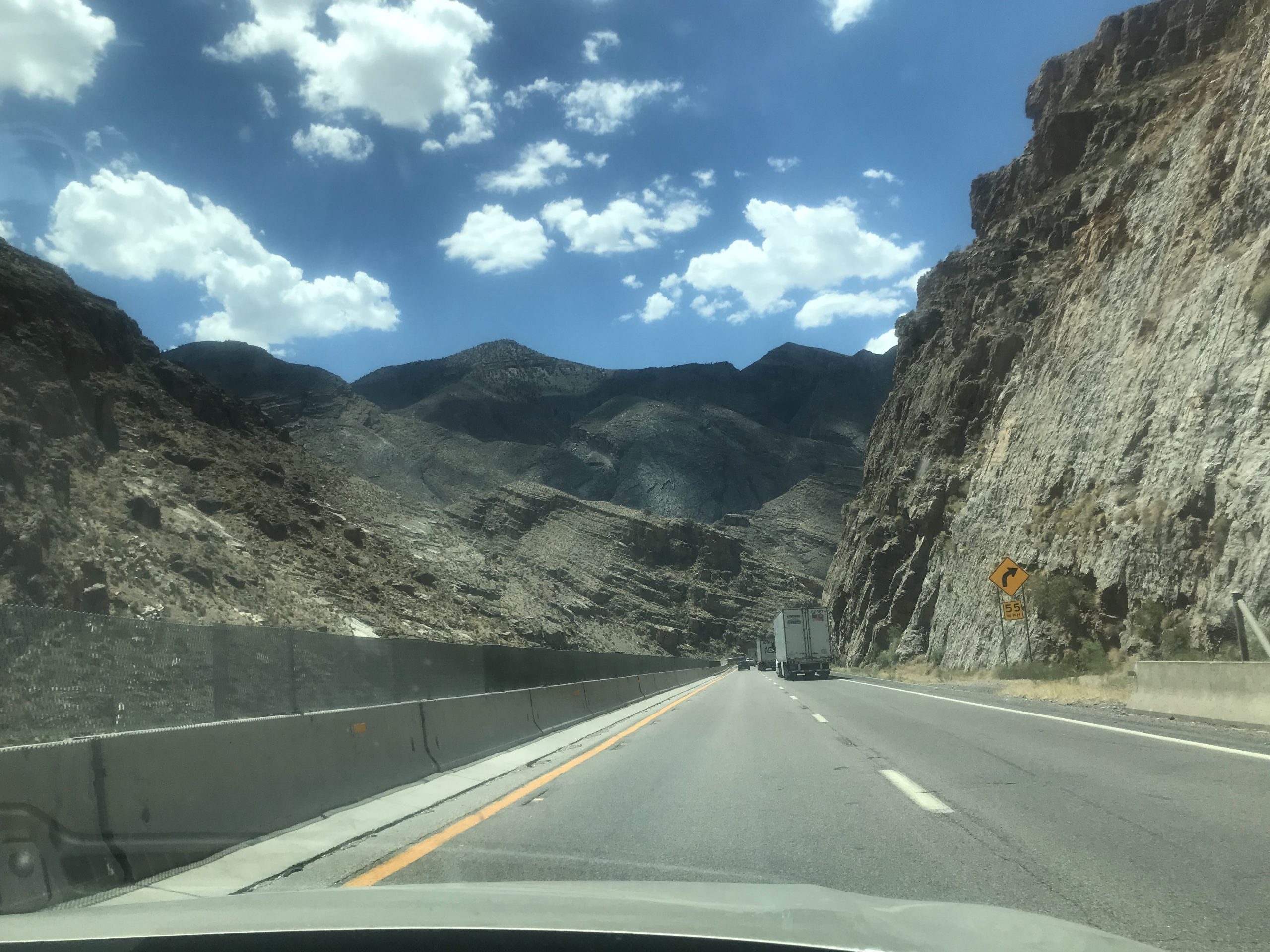 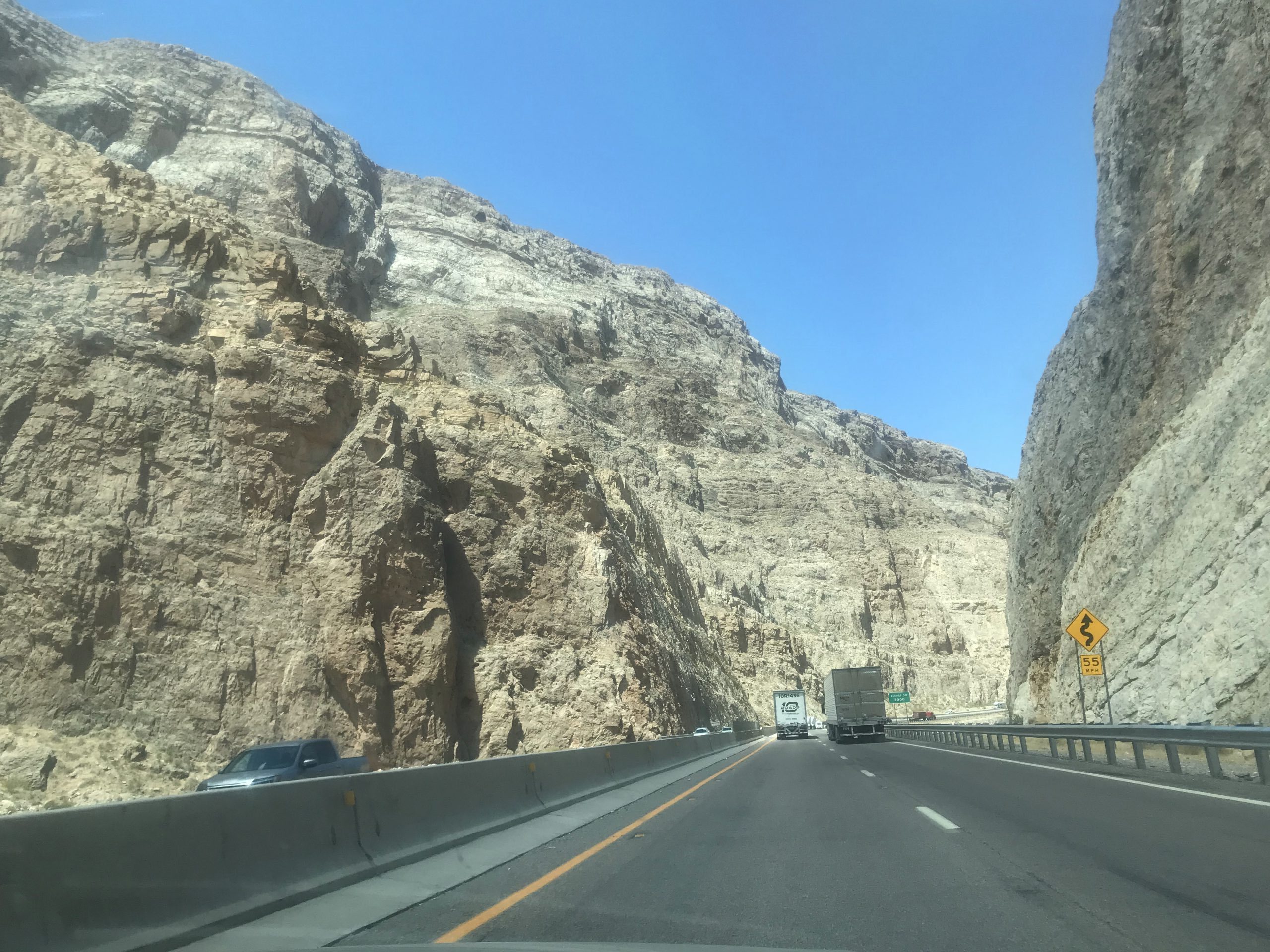 By the time we arrived at Cedar City, it was time to check-in, quickly setup our gear in our room and then make our room to the stadium where all of the onfield work for the camp would be performed. As part of checking in to the clinic, we were give some pretty nice "gear", including a clinic coin that I'm sure I'll be using for some of my future game. Due to people arriving for the camp at different times throughout the day and night, the onfield scrimmages on the first night were provided as a way of "getting rid of the cobwebs". We were randomly assigned to crews and assigned to different locations around the main stadium, to officiate the various scrimmages. This was a great opportunity to work with people that would be in a different crew for the duration of the clinic and a great way of "hitting the ground running". It was good to be able to get on the field and get a feel for what will be expected for the rest of the camp.

The following day, we started off with classroom sessions covering an introduction to the clinic and information about the rotational policy for the clinic in regards to which field the crews would be assigned to. With the clinic being held at the Southern University of Utah (SUU) campus, we were privileged to have the current Head Coach of SUU DeLane Fitzgerald welcome us to the SUU campus and to our clinic. He spoke about his history of coaching and how he's been able to successfully rebuild programs as the schools that he's coached at. It was fascinating to hear from Coach Fitzgerald, particularly around how he approaches and deals with officials, and after listening to him speak, it's easy to see why he's so highly regarded at the schools that he's previously coached at.

After these sessions, it was time to hit the field for our onfield sessions. During the duration of the clinic, we were privileged to have Coach Sean Robbins (commonly referred to as Coach Sean) as part of the clinic. Coach Sean is the founder of Fitness & Sports Excellerated, LLC (FSE). He is the fitness and agility consultant for the football officials for the NFL, Big Ten, MAC, and Missouri Valley Conference. Over the course of the clinic each crew was assigned to two sessions with Coach Sean, covering various components from warm-up techniques to various movement and change of direction techniques that are specifically crafted to match the requirements of onfield officials. Our crew was assigned to Coach Sean for the first of our onfield sessions, so it was a great way of working through various warm-up techniques and getting our muscles and minds ready for the rest of the clinic.
After the session with Coach Sean we headed to one of the designated fields for our first onfield session for the clinic. After getting to know each other over our multiple pre-game conference calls, it was great to finally work together on the field. One of the benefits of this clinic is that each crew is assigned a crew mentor, who joins the pre-game conference call, as well as providing mentorship for the entire during the camp. I was fortunate that our crew mentor was also an Umpire, the same position that I was officiating at for the duration of the clinic, so I was able to get some very position specific feedback throughout the camp.
After these first couple of sessions, we headed back to the classrooms for position-specific breakout sessions where our position clinicians, which there were multiple of for each position, were able to further explain some of the mechanics and philosophies of each position. They were also able to provide feedback after observing the first couple of onfield sessions so that we could implement those in future onfield sessions for the clinic.
After the breakout session, it was back to the field for one more scrimmage session before we finished up the day with a general classroom session followed up dinner. Dinner was a great opportunity to socialise with other crew members and get to know other officials at the camp. 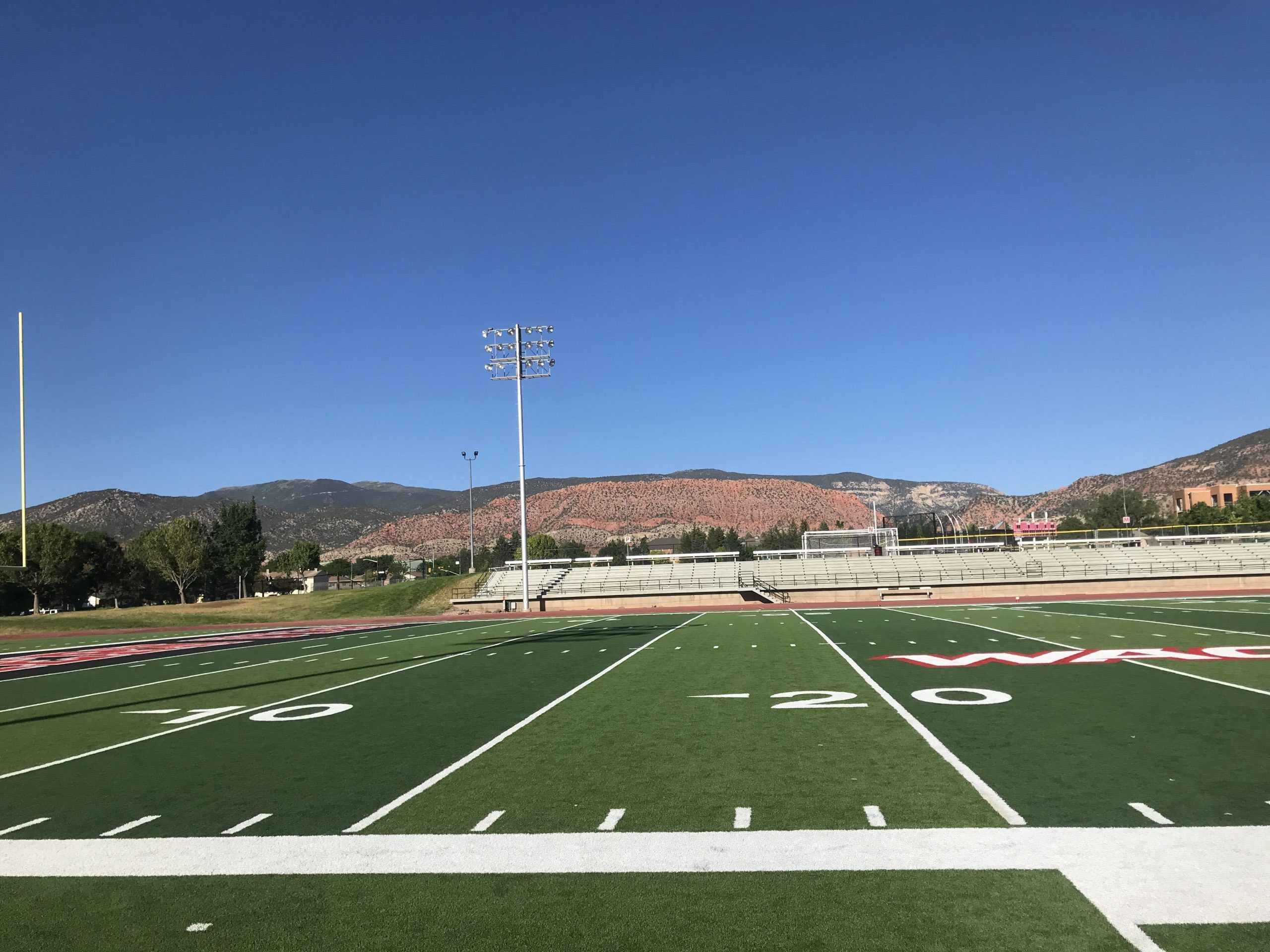 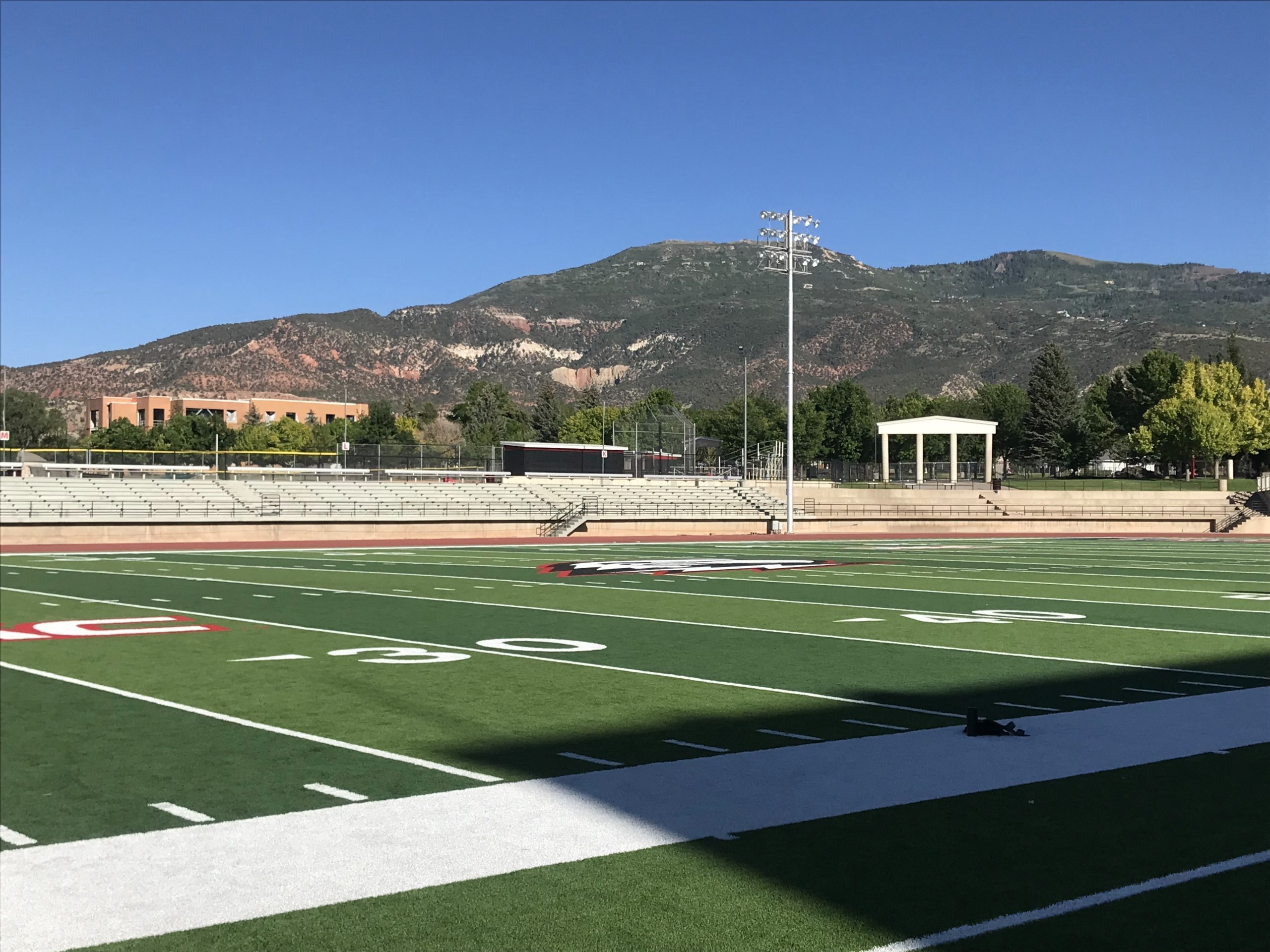 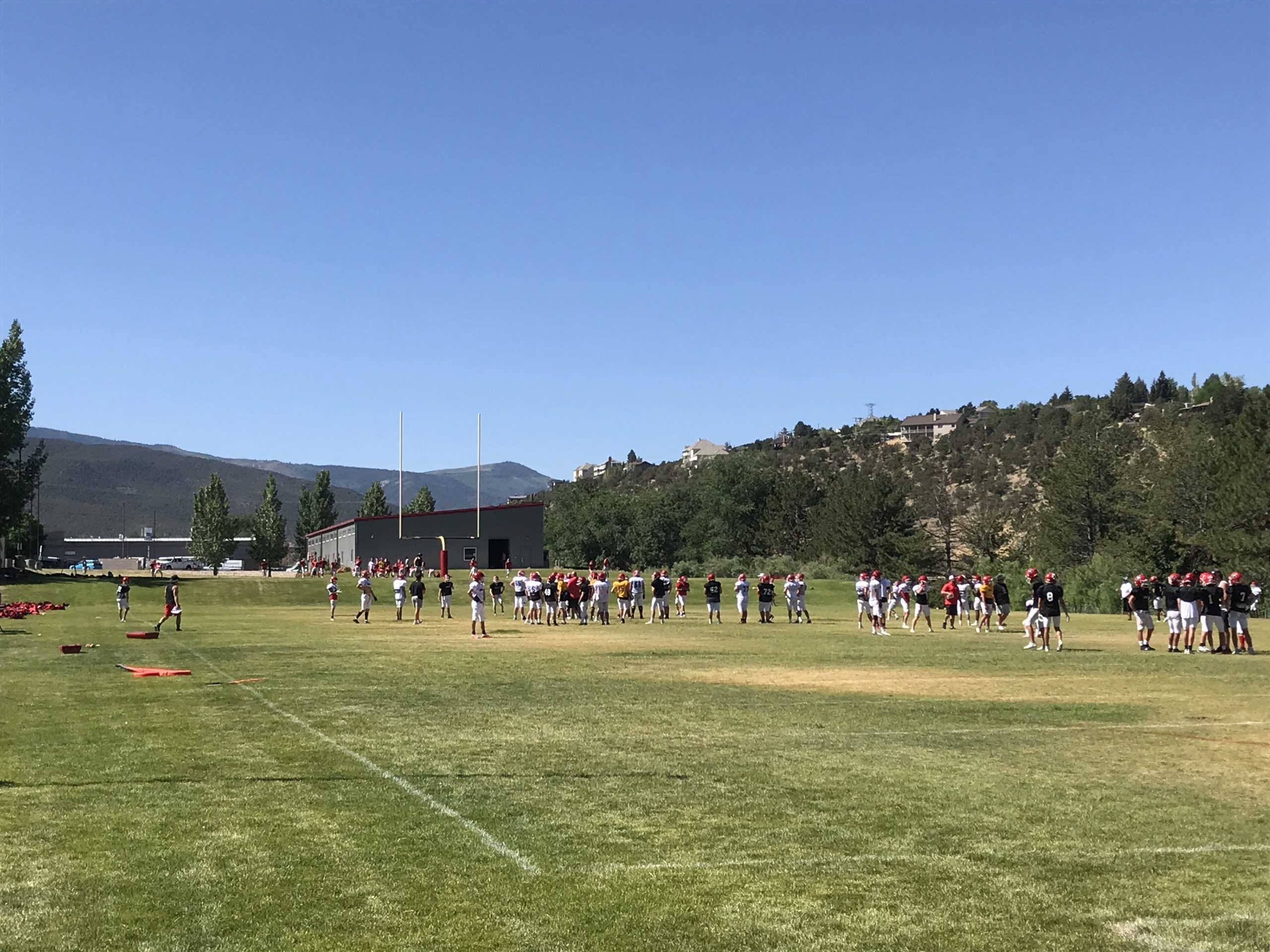 The second day of camp started pretty much the same as the previous day, a general classroom session followed by more onfield scrimmage sessions. These onfield sessions were a great way of allowing us to implement the feedback points that we had received the day before. During the first day of camp the assigned crew mentor and evaluators, followed their designated crew around for the duration of the day, but on the second day we were assigned different evaluators based on which field we were officiating on. During one of the earlier scrimmages on the second day one one clinician gave me some feedback specifically around positioning, which I continued to work on for the rest of the camp. During a later scrimmage, on that same day, I had a different clinician observe how he liked the way that I was positioning. It was encouraging to hear that I was successfully able to implement feedback provided by the clinicians to help me to continue to improve as an official.
Once these first couple of sessions were completed, it was organised for us to take crew photos. One of our crew members managed to leave some of his equiment at one of the fields which meant that when our crew was initially due to have their photo taken, we had to step aside and allow the other crews to have their photo taken. Once our crew member returned our mentor "punished" us by making us do some sit-ups in front of everyone before our photo was taken. It was neat to see the whole crew participate in the "punishment" and have a bit of fun with it. 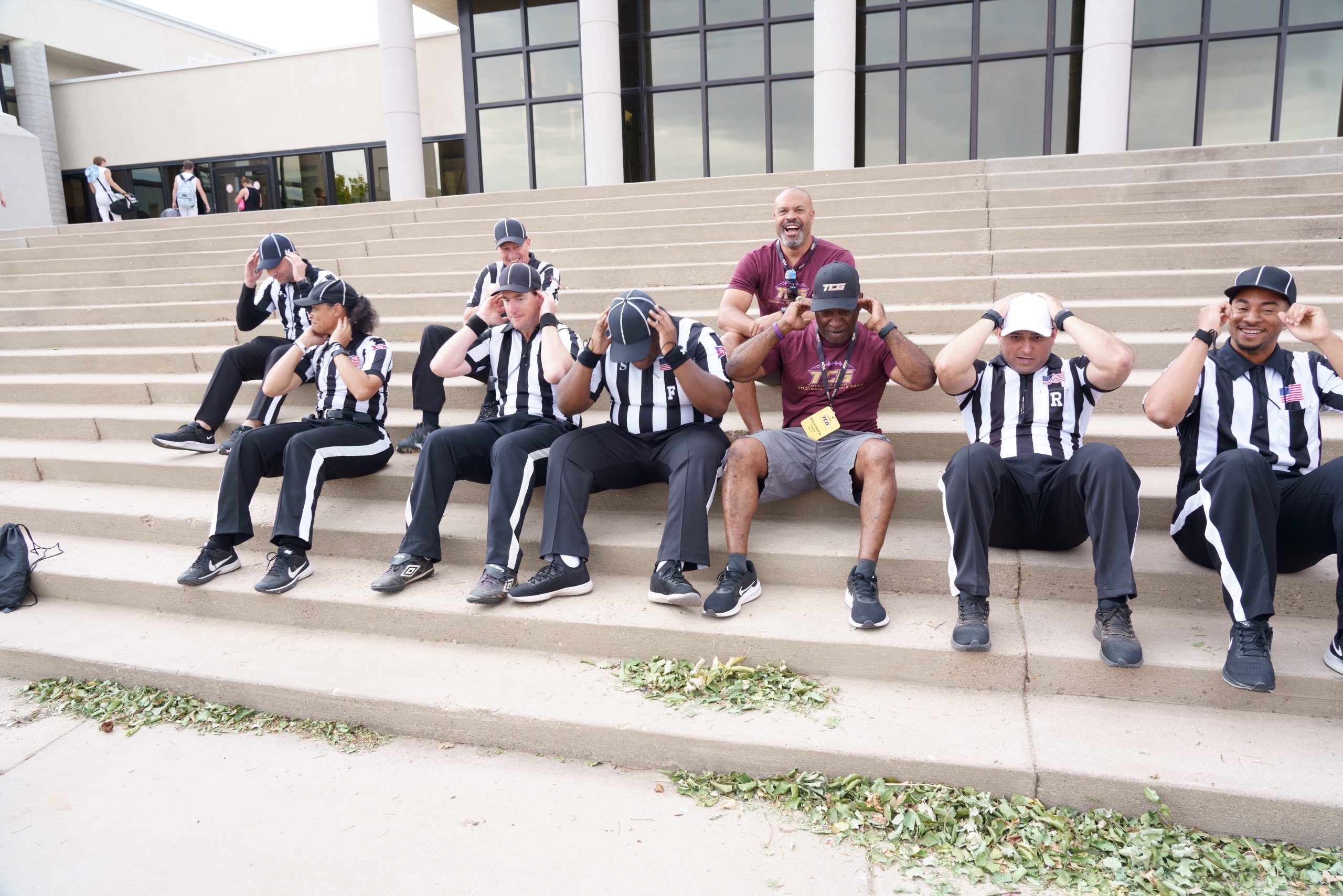 After the photos, it was time for our position breakout sessions. These sessions were another opportunity to discuss various mechanics and philosophies of our positon and to review game film and continue our learning and growth.
We ended up having two more onfield sessions that afternoon\night, with our last on-field session being our second session with Coach Sean working on advanced techniques, before heading back to our accomodation for dinner and another chance to get to know fellow officials at the camp. It's always encouraging to hear about each officials journey, and what their goals are.
The final day of the clinic started with a brief classroom session covering off on the procedure for the onfield sessions, and the rotational requirements for the crews. The final onfield sessions was the "goal-line challenge", where each team starts with the ball on the 20yd line and has 4 plays to score. For the teams this is the culmination of their camp as well, so it's a highly competitive atmosphere, which is a great opportunitiy to us, as officials, to work on our deadball officiating and really work on our game management skills. This was a perfect way to complete the clinic, from an officiating perspective.
Following the conclusion of this session, we had some final words from our game clinicians, before heading back to our accomodation to complete the packup and hand in our keys.
My crew mate drove me back to Las Vegas, with both drives being a great opportunity to get to know him and discuss various things that we both learnt at camp. 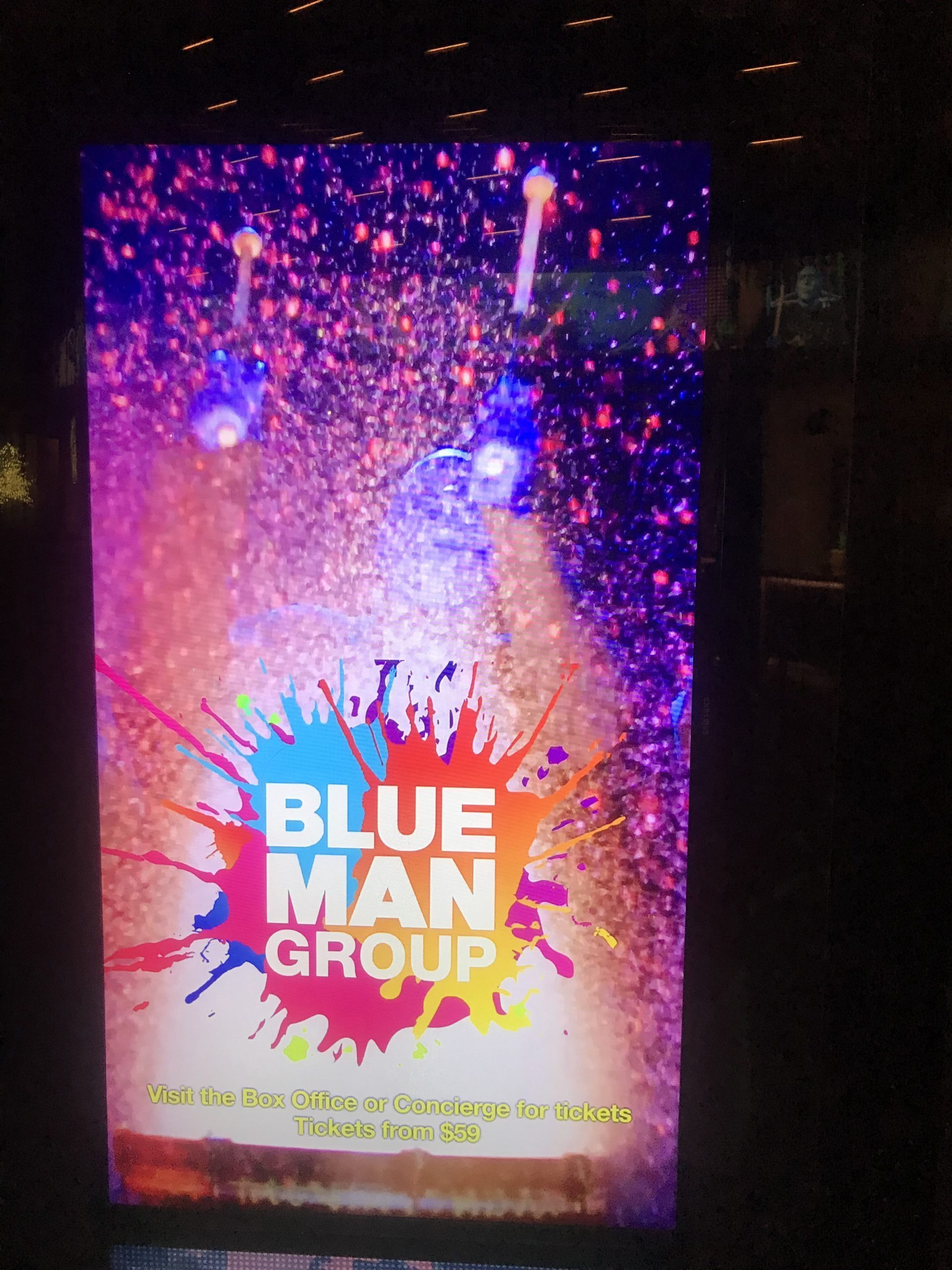 After arriving back in Las Vegas and checking back in to my hotel, I headed off to see the "Blue Man Group". I saw these guys the last time I was in Las Vegas (approx 3 years ago), prior to the COVID Pandemic, so it was going to be interesting to see if they had to change any of their routine as a result of the pandemic. It was another thoroughly enjoyable performance by them, and I was glad that I made the time to go and see them.
After checking out of the hotel the following morning it was a couple of flights to my final destination for this amazing trip. 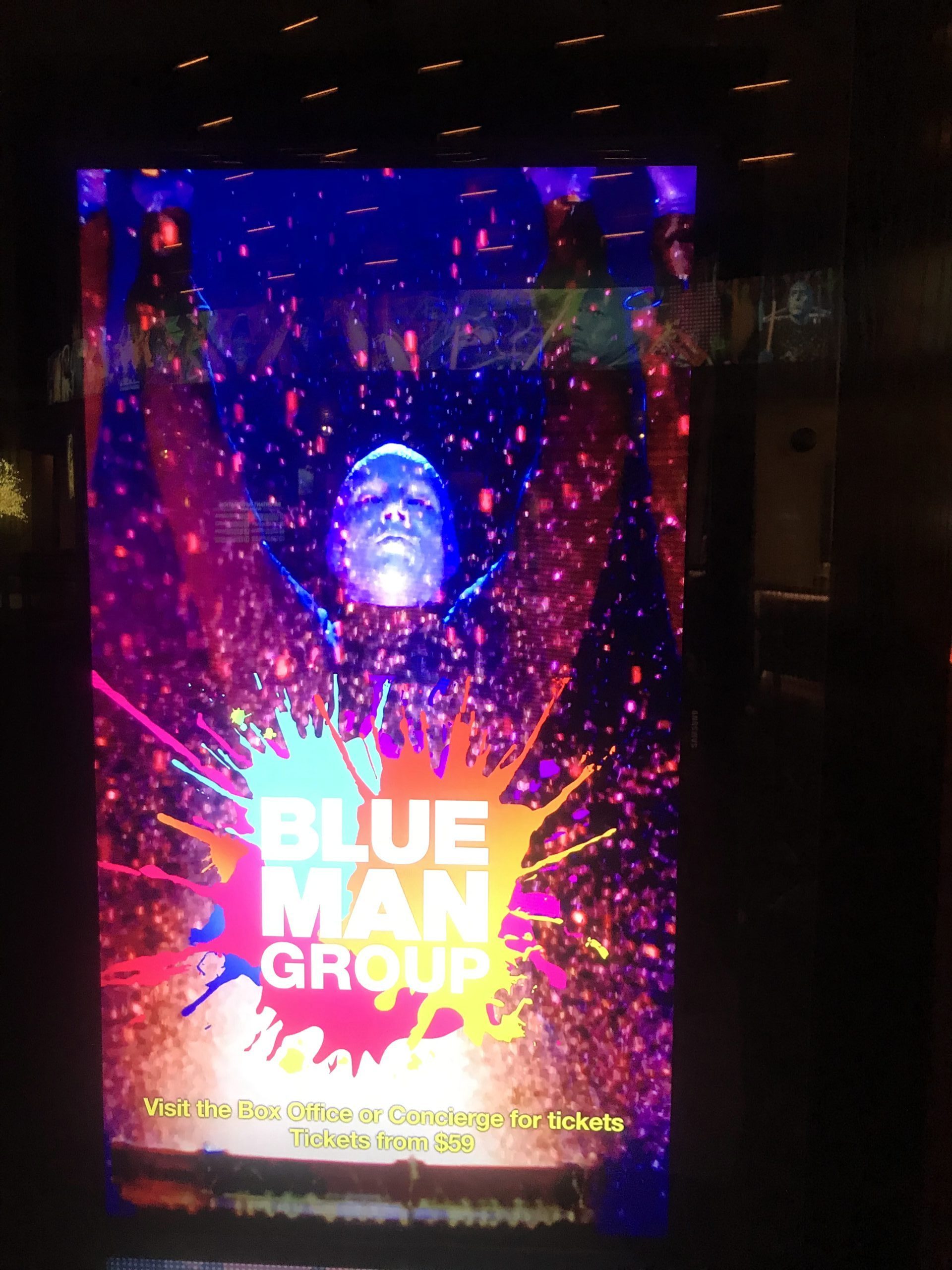