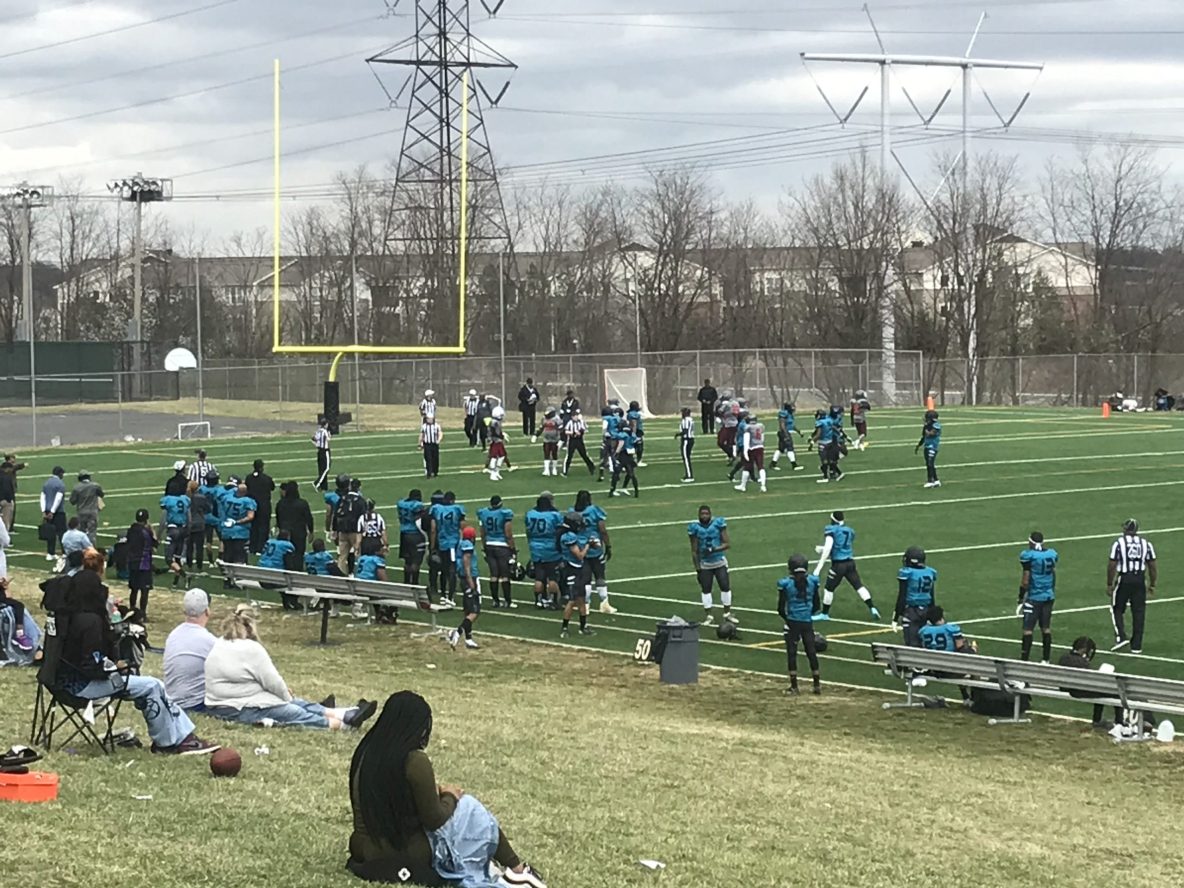 Written by Greg Evers - March 2022
I was fortunate enough to have the opportunity to travel to Baltimore, in the United States of America, to attend the Tom Beard Football Officials Camp. This was my first officiating camp within the US to learn from some of the best in the business and continue to grow as an official. What an experience I had. There was over 25 current NFL officials in attendance, as well as over 40 current FBS College (top College level) officials there in a capacity as clinicians to help all of the attendees, like myself, learn and get better.
The camp started with 2 keynote speakers; Ron Torbert (NFL Super Bowl LVI Referee) and Duane Heydt (2022 College Football Playoff National Championship). These guys gave us an insight in to their journey in officiating as well as tips and pointers about how to approach officiating and continue to improve your officiating skills. The insight given by these 2 gentlemen was worth the trip right there. I could have left the camp right then and come home a very happy person, but that was just the start of a phenomenal weekend, for me.
After the keynote speeches by those 2 exceptional Referees, they have a tradition where they award a scholarship to the official who has travelled the furthest for the conference. Seeing as though I came from Australia, I was fortunate enough that it was awarded to me. As I went up on stage to be acknowledged for it, I was put on the spot and just asked to say a couple of words about officiating in Australia, as it surprised quite a lot of them that it's played in Australia. I was able to give a quick and short summary about my playing, and officiating career and what I was looking at getting out of the conference. To do this in front of over 200 officials, across all levels of officiating within the US, was certainly another highlight in my officiating career.


We then went for a break and I was able to go and have a quick chat to both Ron and Duane and they were both so appreciative that I'ld travelled so far to come and learn. They are both 2 exceptionally humble and approachable people, and it was a pleasure to spend a couple of minutes with both of them. Being able to speak to them was a huge encouragement to keep working on my officiating development, who knows what other opportunities may be presented in the future. 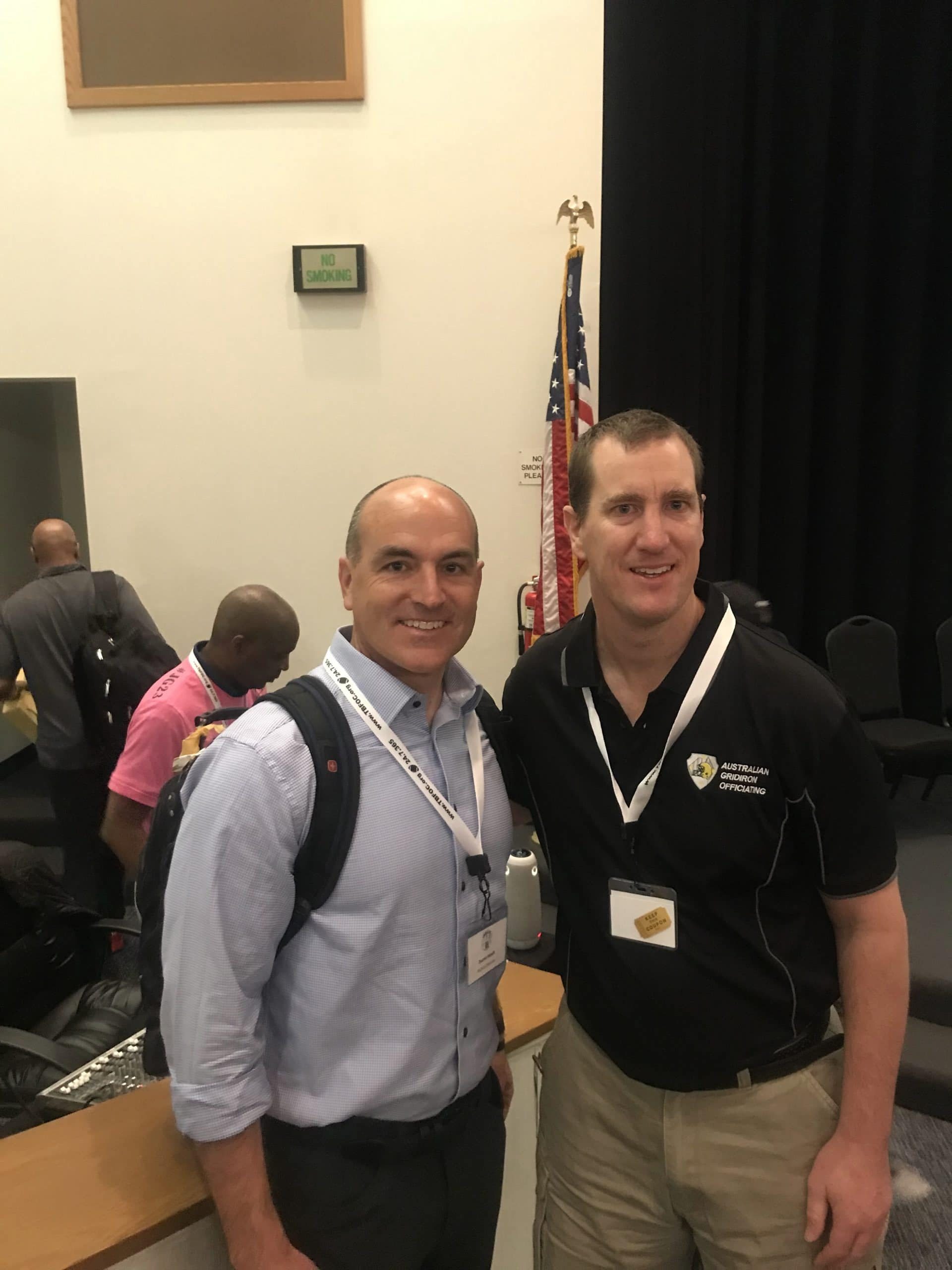 We then go to hear from Walt Anderson (NFL Senior V.P of Officiating) about what the NFL is doing to help encourage more people to become officials, from the grassroots all the way up to the NFL, and then cover off on what they look for in officials when selecting them for the NFL.

We had further sessions throughout the day, covering various topics, but a great deal of the time was spent in positional meetings getting plenty of tips and guidance from current NCAA FBS College officials. They all provided some great tips and instructions around what's expected as an official and various areas to work on to improve your officiating at those specific positions.

Receiving the scholarship and being introduced as coming from Australia made it so much easier to network with a lot of the other officials, either the clinicians or attendees as the "ice breaker" was always them asking about what it's like in Australia and what our games are like, or even just talking about Australia in general because some of them have either been to or want to come to Australia and wanted to hear more about it. It was a great way of building some relationships with officials all around the country. This was one of the main reasons that I wanted to attend these camps, so that I could get know other officials around the world, as you never know what opportunities may open up further down the track.

Through those interactions I have been encouraged to attend some other conferences that are held throughout the country. I was also personally invited to attend conferences and camps that some of these officials hold themselves. These are some great opportunities and ones I'll definitely be looking at in the future. It was so encouraging to have the support and encouragement from everyone I spoke to and they all appreciated the passion that I obviously have for officiating when they found out that I've travelled so far. To then let them know that I've already planned a couple of trips to conferences later in the year, they were quite impressed and really excited for me to be able to do that.

Prior to going on the camp I had been engaging with various officials within the US via podcasts and online training sessions, mainly as a way of wokring on my skills to get better at what I do. It was through engaging with these officials that other officials heard about my attendance at this camp and there were multiple officials who introduced themselves and mentioned that they heard about me through those various channels. One official, in particular, was talking to his wife about me coming from Australia and was telling her "that I have to meet him" for the simple fact that I've come so far, so that was pretty cool.

All of these networking and sessions were held on the first day and it was more than worth the effort to come across. The camp could have ended after the first day and there would have already been plenty of things that I could use to continue to improve as an official. Things were to move to an onfield component on the following day and this was going to be the opportunity that I was looking forward to, mainly as a way of comparing where my skills would compare with officials at various levels. I wanted to make sure that I represented officials in Australia in the best way that I could, and show them that even though we may not have some of the resources that they do in the US, that there are still some really good officials around the world. There were 3 venues, with 3 games at each venue. Each camp attendee was assigned 1 quarter from a game, to have direct feedback from a clinician with specific improvements noted. Some officials, myself included, were fortunate enough to have 2 quarters. I was even fortunate to have the last game at the venue that I was at. 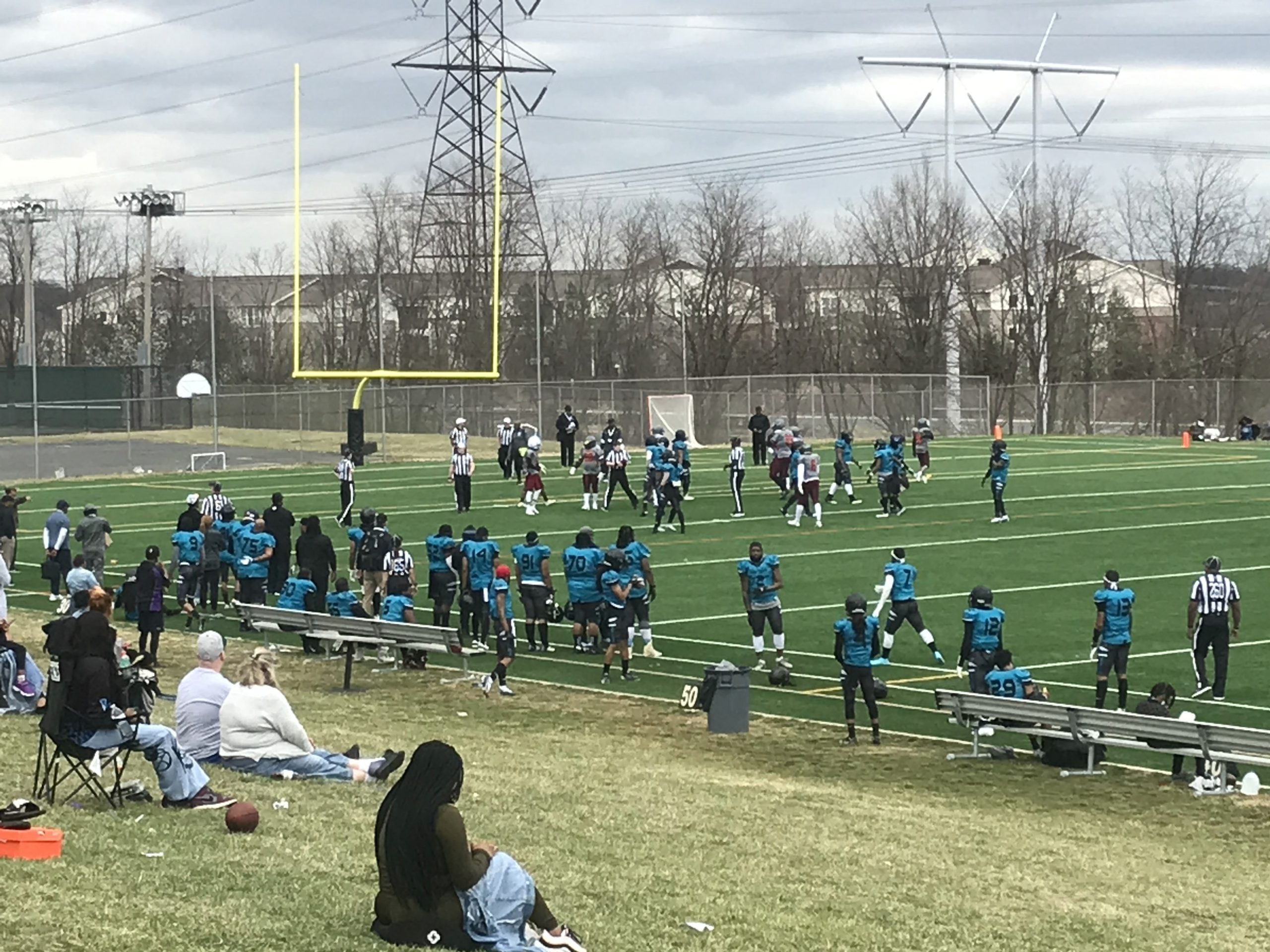 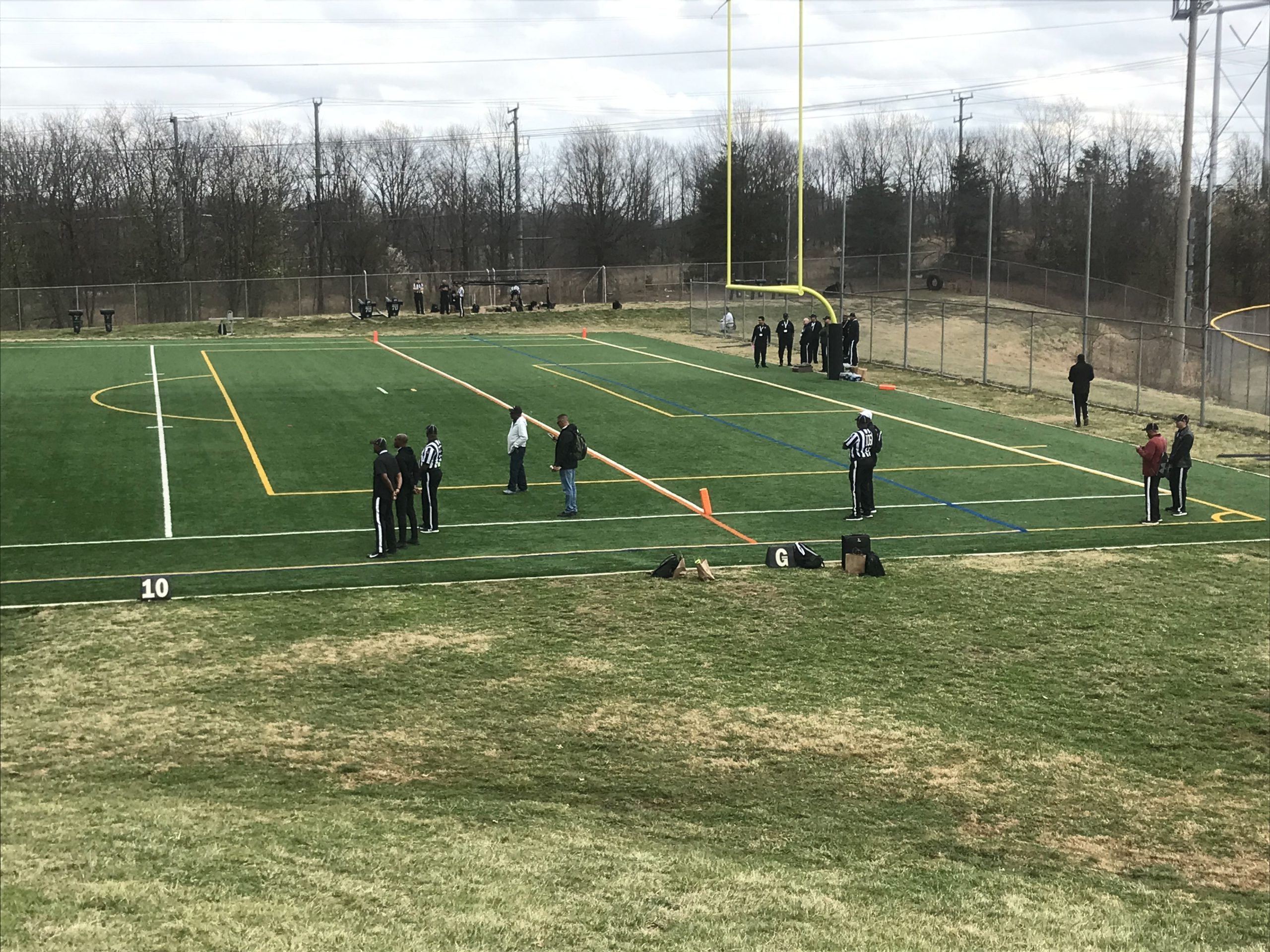 During the first game at the venue that I was at, Duane Heydt was there just observing the games and giving some pointers to anyone who wanted to talk to him about the Referee position. I was fortunate to spent about the first quarter and a half just talking to him about all things officiating related; specifics about the Referee position, his journey, officiating the Championship game and a whole bunch of other things. He was extremely open and honest with all of the questions and patient with the constant questions, and it was ceratainly worthwile taking the time to talk to him.

For the rest of the day I was able to hover near the clinician who was observing the other Centre Judges (the position I chose to participate as), and hear the feedback he was providing as well as asking specific play-related questions as they happened on the field. He was extremely forthcoming and was more than happy to provide an answer to anything we asked, which I appreciated immensely. 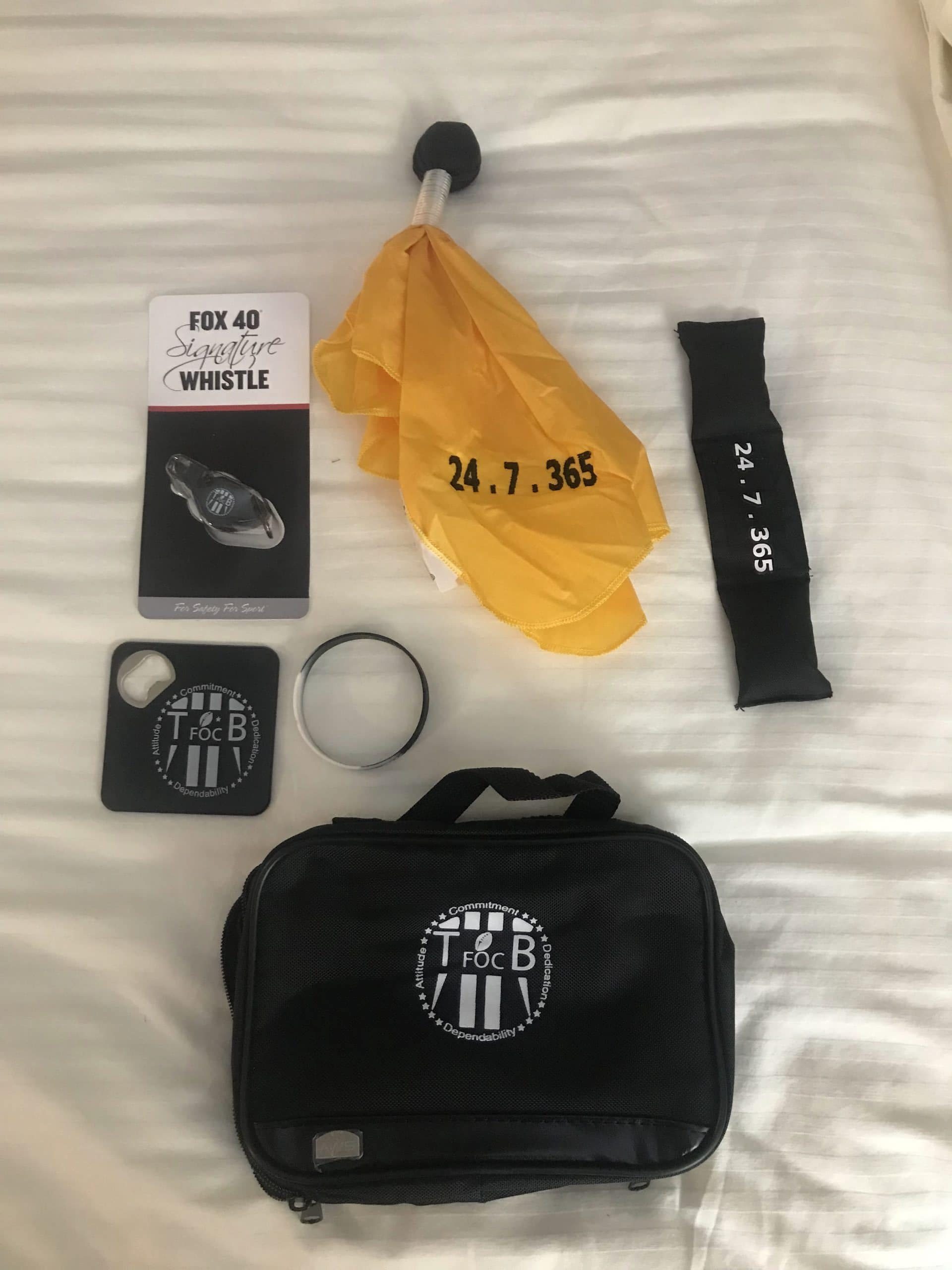 It then came my time to get on the field for the last game. As part of the clinic each clinician was given a kit of officiating equipment. The person who the clinic is named after, Tom Beard, had a saying that everyday was gameday, so be prepared 24 hours a day, 7 days a week, 365 days a year. Hence the relevance of those numbers on the equipment. It was an honour to then use this during the game that we had.

My clinician told the 2 x Centre Judges (we each had 2 x qtrs of the game) that he would review the first half, give us feedback and then review how we went against the feedback provided. My first quarter (2nd qtr of the game) went pretty well, I was fortunate to have 2 calls that I threw a penalty flag on. We got to half-time, he gave me some specific mechanic feedback that he would like to see me improve on in the second half but he also mentioned that he was happy with the flags that I did throw, as the fouls were there and required the flag to be thrown.

When my second quarter came around, I consciously worked on implementing the mechanics that he gave me the feedback about and when we got to full time, and we ran through another review, he had ticked off all of the mechanics improvements that he wanted to see, which indicated that he was happy that I took on the advice and implemented them. That's exactly why I came to this camp, to get that feedback and implement it so I was really happy that I could that.

All up this experience has been a phenomenal experience and I know that I'm coming back as a better official and have plenty of new things to continue to work on and continue to improve. It was a great opportunity to see where I might be in comparison to the level of officiating across the various levels over in the US, and it's a huge encouragment to keep improving at my officiating.

This experience has increased the anticipation for my attendance at further comps, due to the welcoming of all of the officials as well as the direct feedback that's provided. I'm really looking forward to continuing my growth and showing further improvements at future camps. Who knows what opportunities might open up down the track.

I couldn't have done this without the support of my wife, who's been at home looking after the kids. For her to support me with my passion of officiating is certainly something that I will never take for granted and am eternally thankful to her for that.